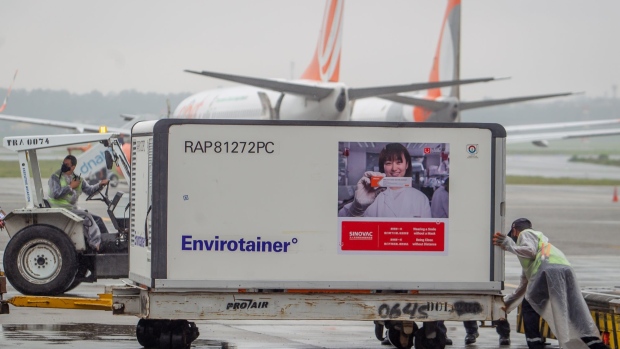 Dimas Tadeu Covas, director of the Butantan Institute, from left, Jean Gorinchteyn, Sao Paulo's health secretary, and Joao Doria, Sao Paulo's governor, hold boxes of the Sinovac Biotech Ltd. coronavirus vaccine at Guarulhos International Airport (GRU) in Sao Paulo, Brazil, on Thursday, Nov. 19, 2020. The CoronaVac vaccine developed by China's Sinovac in partnership with Butantan Institute is able to produce an immune response in the body 28 days after its application in 97% of cases, according to results of clinical studies under phases 1 and 2 published at the Lancet Infectious Diseases magazine. , Bloomberg

(Bloomberg) -- Sao Paulo, Brazil’s biggest state, which has born the brunt of the pandemic, got its first batch of CoronaVac shots amid a fresh rise in coronavirus cases.

A delegation of politicians and researchers received the shipment of 120,000 doses of Sinovac Biotech Ltd.’s vaccines Thursday morning at the international airport with another 46 million doses expected to arrive by January.

CoronaVac is one of four vaccines currently in phase 3 trials in Brazil, involving some 13,000 health care professionals. Distribution to Sao Paulo’s broader population of 44 million residents will begin only after the trials are concluded and the shot is cleared by the nation’s health regulator, Anvisa.

Hours after the arrival of the first vaccines, state officials including Governor Joao Doria spoke to reporters at a press conference that largely focused on a new spike in cases.

“We see a certain fatigue in regards to the pandemic,” said Health Secretary Jean Gorinchteyn. “It’s a time for attention and caution.”

While still well below critical moments seen previously this year, Sao Paulo’s moving average of new infections has jumped to the highest since early October. Hospitalizations have risen 8% in the past week.

The state, the country’s wealthiest, accounts for roughly 20% of the nation’s 5.95 million cases. One in four Brazilians who have died from the disease are in Sao Paulo.

While state officials stopped short of announcing new restrictive measures and discarded the possibility of a lockdown, they suspended the scheduling of all non-essential surgeries in the public health system. Field hospitals have been disbanded, but beds reserved for Covid patients will be kept on hold for now.

Recent problems with the health ministry’s system -- the target of a cyber attack earlier this month -- have made the case numbers less reliable and put a greater emphasis on tracking hospitalizations, officials said.

The main factor behind the increase in infections seems to be parties and gatherings of younger people, Gorinchteyn said.

Sinovac’s vaccine, which is being developed locally in partnership with Sao Paulo’s Butantan Institute, has become the focus of an escalating feud between Doria and President Jair Bolsonaro.

Earlier this month, health regulator Anvisa halted tests of the shot after a participant in the trials died -- only to reverse its decision less than 48 hours later amid criticism the move was politically motivated. The individual’s death was unrelated to the trial, researchers said.

Bolsonaro, who routinely downplays the severity of the virus, has criticized ally-turned-foe Doria and the “origin” of the vaccine. He also appeared to celebrate the pausing of the trial on social media saying it was “another win for Bolsonaro.”

China has already started administering its vaccines, including Coronavac, to hundreds of thousands of people under an expansive emergency use approval. China’s Science Ministry said last month that its companies have inoculated about 60,000 volunteers in final-stage trials with no reports of serious adverse events.

“Now is the time for the federal government to make a concerted effort on vaccines,” Doria said. “Vaccines are the definitive solution.”