WHO Regional Director on Pneumonia Outbreak in China

A viral lung illness that originated in central China has been confirmed in a single case in the U.S., putting more pressure on health officials to contain an outbreak that has infected several hundred in Asia and spread to five countries.

Six deaths have been reported and cases have been found in five other countries. U.S. Centers for Disease Control and Prevention officials said Tuesday that a case had been identified in Washington state from a person recently traveling in China.

Since the new coronavirus was first detected in December, the number of infections from the has grown to 291, with 139 of them over the past weekend. While the vast majority of the cases are in Wuhan, a city of 11 million in the eastern inland of China, infections have been reported in Beijing, Shanghai, Tianjin, Zhejiang and Henan.

The U.S. case is a man in his 30s who was traveling in China and arrived back in the U.S. on Jan. 15, Washington State health officials said on a call with the CDC Tuesday. The officials said the man sought care quickly after monitoring news about the virus and is in good condition, though has been hospitalized out of an abundance of caution.

Health officials still don’t know how dangerous the virus is or exactly how it spreads, but the rapid rise in illnesses has prompted tightened borders and a rapid attempt to trace contacts of those who have become ill. On Wednesday, the World Health Organization is scheduled to decide whether the situation is a public health emergency of international concern, a designation used for complex epidemics that can cross borders.

Russia has tightened some border controls with China, and the U.S. has set up airport checkpoints for passengers coming from China. On Tuesday, the U.S. said that it had added new checkpoints in Atlanta and Chicago, in addition to existing ones in New York, San Francisco and Los Angeles. So far, health officials have screened 1,200 passengers with no confirmed cases of the coronavirus, according to the CDC.

White House Press Secretary Stephanie Grisham said that President Donald Trump has been briefed on the Wuhan outbreak. She would not say when the briefing occurred or who delivered it.

The virus is thought to be able to be spread from person to person and in some cases has infected doctors and nurses. The early days of the outbreak have evoked comparisons to SARS, or severe acute respiratory syndrome, the illness that spread through airports and hospitals around the globe in 2003, killing nearly 800 people in a matter of months.

With the Chinese New Year travel season about to send billions of people on holiday journeys, no one wants to underestimate the disease.

“The speed with which this virus has been identified is testament to changes in public health in China since SARS,” said Jeremy Farrar, director of the Wellcome Trust, in a statement. “However, we know there is more to come from this outbreak -- and with travel being a huge part of the fast approaching Chinese New Year, it is right that concern levels are at the highest level.” 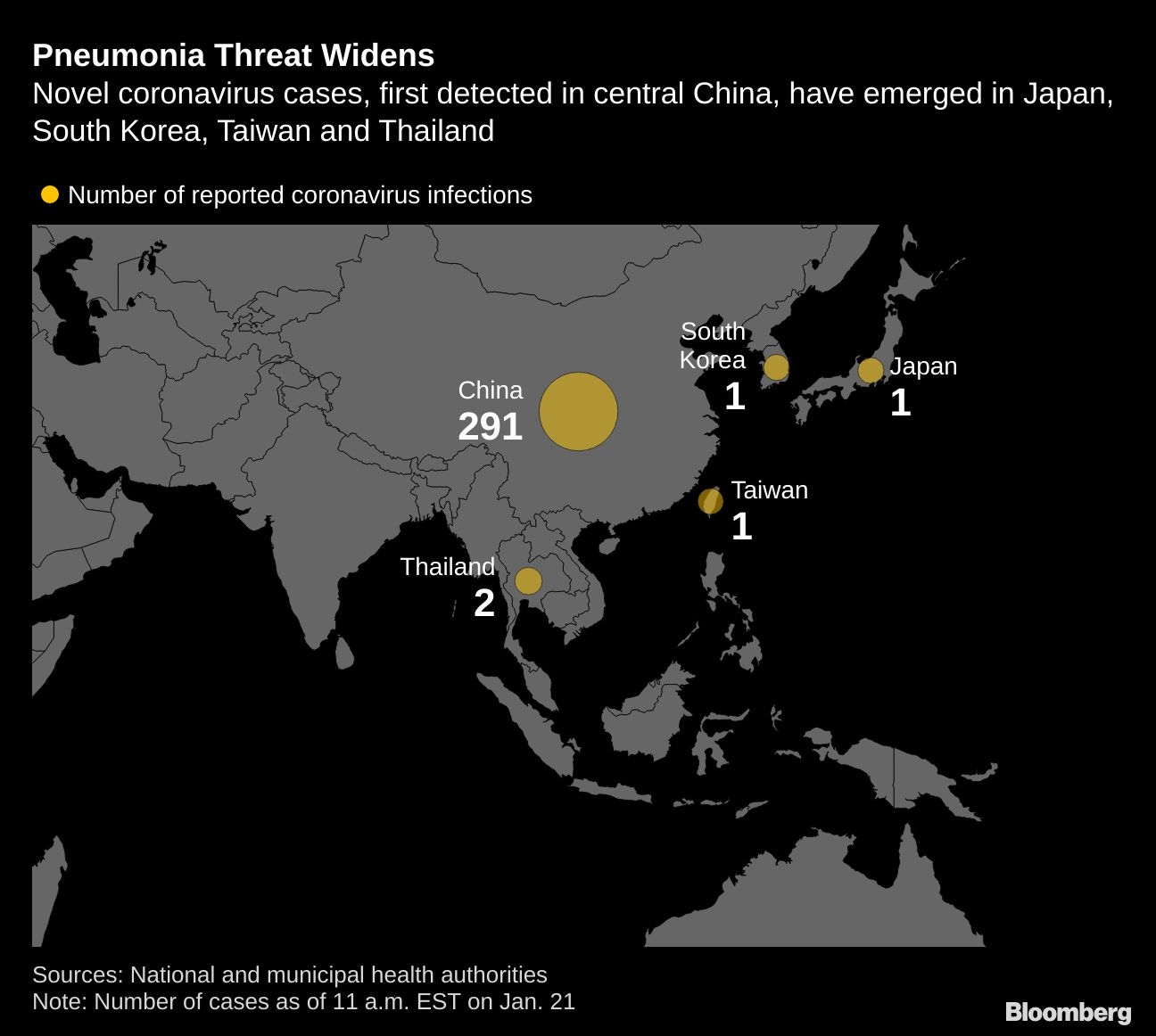 A World Health Organization emergency declaration could include recommendations to restrict travel or trade to stop the outbreak. The agency has formed teams at its Geneva headquarters to study the virus, its spread and its symptoms and is sending a team to China to help gather information, according to David Heymann, an infectious disease researcher in the U.K. who advises the agency.

A significant issue in the panel’s deliberations will be the severity of infections. Some of the deaths reported so far appear to have been in sick, elderly people, which suggests the virus poses the greatest danger to people whose health is already compromised, Heymann said.

Both the Wuhan virus, known as 2019-nCoV, and SARS belong to the family of coronaviruses, so called because of their crown-like shape. Many such viruses cross the barrier between animals and humans, as the Wuhan virus appears to have done, according to Heymann, who’s also a professor of infectious disease epidemiology at the London School of Hygiene and Tropical Medicine who was formerly with the U.S. CDC. Often it takes time to determine what form the new virus will take, he said.

Some viruses, like rabies, sporadically infect humans through animal contact but can’t spread from person to person. Others, like Ebola, emerge in small outbreaks, recede, and then reappear. Some of the most dangerous, like HIV, evolve into forms that infect humans in a widespread, persistent fashion.

The new virus “could be No. 2 or 3, that’s the concern,” Heymann said in an interview. “We need enough information to make a proper risk assessment.”

Despite the worries, the new virus is likely less deadly than SARS, said University of Sydney associate professor Adam Kamradt-Scott.

Wuhan has reported 258 coronavirus cases as of Jan. 20, with 63 patients in serious or critical condition, Mayor Zhou Xianwang told China’s state broadcaster CCTV. The city of 11 million is now under heavy screening: People found to have symptoms like fever at travel checkpoints have been barred from boarding planes and trains. Tour groups have reportedly been banned from leaving the city.

Some of the first patients infected in Wuhan worked or shopped at a seafood market where live animals and wildlife parts were reportedly sold.

These so-called wet markets, where shoppers mingle in narrow spaces with everything from live poultry to snakes, have been a key source in the emergence of new viruses transmitted from animals to humans.

The Chinese government’s response to the outbreak seems evolved since SARS a decade-and-a-half ago.

China was criticized at the time for initially providing limited information and denying the scope of the problem. With this new virus, health experts have generally praised the speed at which China identified and shared the genetic sequencing of the new coronavirus, allowing other countries to spot cases quickly.

The Communist Party’s top law enforcement body warned officials Tuesday not to cover up disclosures of coronavirus cases, citing the lessons of the 2003 SARS outbreak. In its commentary, the commission noted instructions issued by President Xi Jinping on Monday that the virus must be “resolutely curbed.”

China’s health commission will include the coronavirus in the Class B infectious diseases category, which includes SARS, while taking preventive steps typically used for the most-serious ailments, such as cholera and plague, according to a notice posted on its website late Monday.

--With assistance from Kelly Li, Lin Zhu and Justin Sink