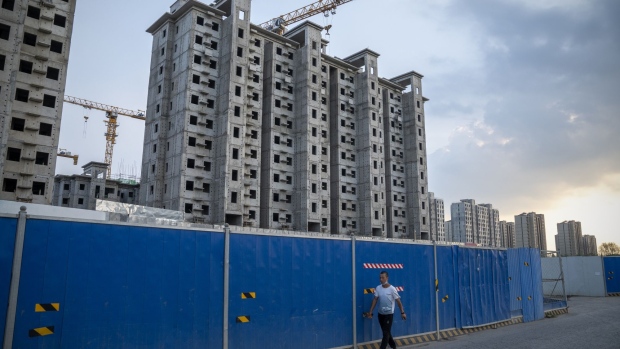 (Bloomberg) -- China’s central bank vowed to expand a special lending program if it’s needed to ensure the delivery of delayed housing projects, and called on banks to provide financing support for this effort.

China will roll out city-specific property polices to support demand, implement special loans dedicated to ensuring property completion and increase its magnitude within reason, the People’s Bank of China said in a statement Thursday. The statement summarized the decisions of the quarterly meeting of the monetary policy committee, which was chaired by Governor Yi Gang and met on Sept. 23.

The more than year-long slump in the housing market has continued to drag on the economy, adding to the damage to growth and activity from the Covid Zero policy. While the economy looks to have rebounded from the April-June period, when the lockdowns of Shanghai, Jilin province and other major economic hubs almost drove gross domestic product to contract, many economists are lowering their expectations for the full year.

“The fourth quarter is a critical time to make progress on construction resumption,” said Chen Wenjing, associate research director at China Index Holdings. “If the macro economy stabilizes and supportive measures get implemented well, the housing sales slump this year may narrow to about 20% in a sign of stabilization.”

China’s housing ministry has yet to provide details about the national bailout fund announced in August, although Bloomberg reported earlier that the lending program will be 200 billion yuan ($27.8 billion). The People’s Bank of China and the Ministry of Finance will channel the money through policy banks such as China Development Bank and Agricultural Development Bank of China, people familiar with the matter told Bloomberg earlier.

The special loans will only be used on homes that have already been sold but are yet to be finished, the people said. Still, it remains unclear how much of the special loans have been allocated.

In the statement on Thursday, the PBOC said it will guide commercial banks to provide funding support to safeguard the interests of homebuyers and support the healthy development of the housing market.

China’s home sales slump has persisted despite additional easing measures from local governments, as the nation grapples with a job crisis and weak economic recovery. Boycotts have “battered” homebuyers’ confidence, the chairman of the second-largest developer China Vanke Co. warned last month, adding that a recovery will only be “mild and slow.”

The central bank also said it would make full use of policy bank financing tools, with an emphasis on supporting infrastructure development. The PBOC vowed to let the market-driven deposit interest rate adjustment mechanism play an important role in pushing borrowing costs lower.

The PBOC will also “enhance the stability of credit growth and ensure that the pace of increase in the money supply and total social financing basically match that of nominal economic growth,” the statement said. “We will further smooth the transmission mechanism of monetary policy and maintain liquidity at a reasonably ample level.”

On the currency the bank promised to strengthen expectation management and keep the yuan’s exchange rate “basically” stable at a reasonable and equilibrium level. On Wednesday the bank issued a strong verbal warning on the currency, cautioning against speculation in currency markets after the yuan weakened below 7.2 to the dollar to a 14-year low.

China will continue to push for regulated, healthy and sustained development of the platform economy which refers to tech giants, and practice normalized oversight over the sector, the PBOC statement said.