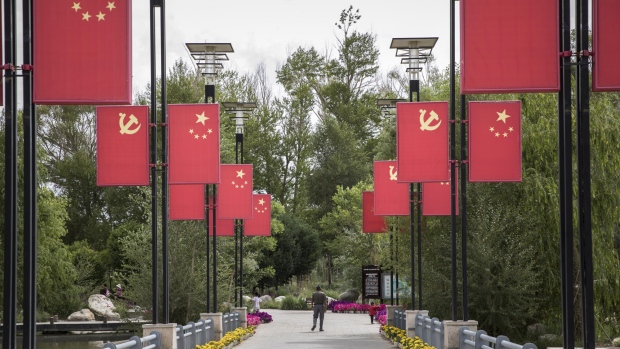 The Chinese national flag and the Chinese Communist Party flag hang on display at a park commemorating General Mu Shengzhong, also known as the father of the Qinghai-Tibet Highway, in Golmud, Qinghai province, China, on Sunday, July 22, 2018. , Bloomberg

The man tasked with building a Goldman Sachs for Communist China was done playing nice.

With hundreds of staff gathered to hear him speak at the Beijing Four Seasons hotel in January, Citic Securities Co. Chairman Zhang Youjun called out leaders of his firm’s international unit by name and questioned their ability to earn a decent return on capital. In a room full of investment bankers, it amounted to a stunning rebuke.

For the executives at Citic’s CLSA unit who sat listening to Zhang in silence, it also marked the end of a tumultuous three-year relationship. Nearly all of them would quit over the next few weeks, kicking off a wave of more than 50 resignations that now threatens to upend China’s push to create a global investment-banking powerhouse.

The story behind the exodus -- pieced together from interviews with almost a dozen current and former executives who asked not to be named so they could speak freely -- illustrates the difficulties China faces as it tries to project its financial might abroad. It involves bruised egos, lost bonuses and a culture clash that some say was inevitable after Citic Securities bought CLSA six years ago, putting the free-wheeling Hong Kong institution in the hands of a state-owned giant that ultimately answers to China’s Communist Party.

“It was only a matter of time before this was going to happen,” said Paul Schulte, the Singapore-based founder of Schulte Research and former senior adviser to CCB International, the overseas unit of a state-owned Chinese bank. “I’m shocked it took this long.”

It was an awkward marriage from the start. Whereas Citic was a product of China’s top-down brand of state capitalism, CLSA was founded by two former journalists in Hong Kong and was imbued with its hometown’s independent streak. The scrappy firm was best known for its incisive research, some of it critical of the Communist Party, and raucous annual forums that featured offbeat speakers like former boxer Mike Tyson. 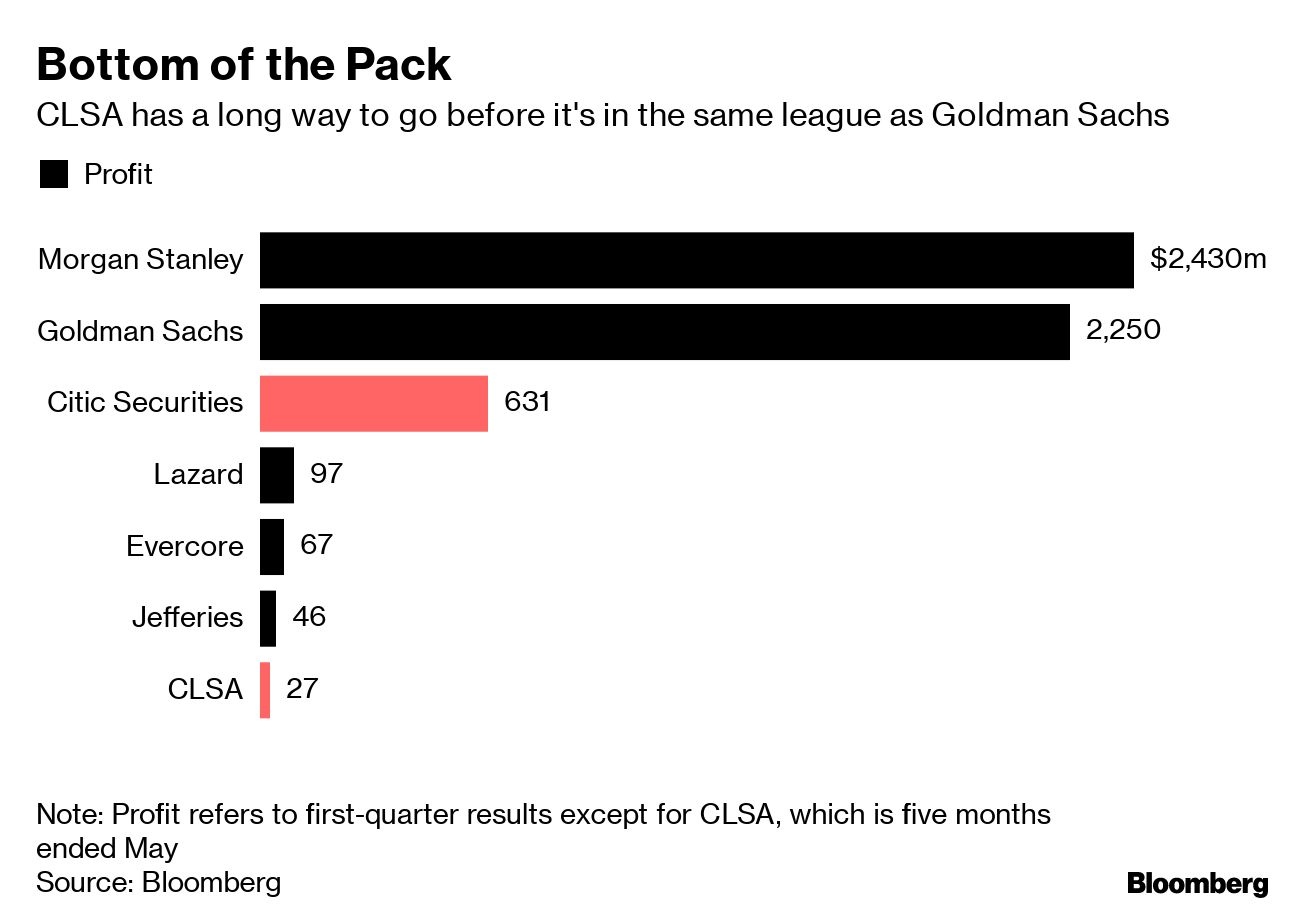 But it never came to pass. For years after the acquisition, staff at Citic and CLSA mostly stuck to their pre-combination silos. And when Zhang stepped up efforts to integrate the businesses after taking the helm from Wang in 2016, tensions flared.

Money and power were key sticking points. Many from the Citic camp, including Zhang, expressed frustration that members of CLSA’s old guard were overpaid relative to the income they produced. The international contingent, on the other hand, chafed at what they considered unnecessary meddling from Beijing and an unwillingness to consult with staff on big decisions.

One senior executive who recently resigned from CLSA cited several aspects of post-takeover life at the firm that made him uncomfortable. Even though he harbored concerns about the direction of his unit and wanted to raise them with Zhang, colleagues from Citic advised him to steer clear of conversations with the boss that didn’t involve flattery. Gaining access was difficult in any case because Zhang tended to avoid dealing with non-Chinese staff.

The executive decided to quit this year after he was forced to move to a different office, in spite of his repeated objections. The episode left him convinced that his autonomy under Zhang would be severely restricted.

Frictions between the two camps were made worse by CLSA’s lackluster results in the face of China’s slowing economy and a difficult environment for capital markets globally.

The situation was dire enough that some executives floated the prospect of selling the firm in 2016, though the idea was never seriously pursued and Citic publicly denied it at the time.

CLSA cut costs instead, asking its 1,500 workers globally to take as many as 10 days of unpaid leave that September and shutting its U.S. equity-research operations in February 2017. The closure led to a writedown that reduced bonuses, further denting morale.

Tensions came to a head late last year, when Zhang informed senior managers that bonuses would be cut again after CLSA lost nearly US$31 million on bonds issued by a unit of embattled conglomerate CEFC China Energy Co.

Slone opposed the decision, saying during a meeting in Beijing that CLSA staffers shouldn’t be affected because the CEFC deal had been driven by bankers from Citic. He warned that if everyone took a hit, it would “break the platform, because trust is fragile,” one of the executives present recalled.

Zhang went ahead anyway, slashing the bonus pool by about 60% from a year earlier. CLSA’s top leaders, including Slone, got zero bonuses and were asked to take pay cuts.

Around the same time, a five-year agreement giving CLSA’s managers operational independence from Citic expired, opening the door for Zhang to make sweeping changes. He moved Beijing-based employees into key back-office roles at CLSA, revamped the firm’s compensation system to bring it more in line with that of Citic and instituted a retirement age of 60 that forced out several staffers with decades of experience.

The exodus of senior leaders began in February. Among the first to leave was Tang Zhenyi, who had served as chairman of CLSA and was seen as a peacemaker between factions in Beijing and Hong Kong before his falling out with Zhang. Slone resigned shortly thereafter and was followed by Nigel Beattie, CLSA’s chief operating officer; Xen Gladstone, who ran sales and trading; Edmund Bradley, head of research; and Christopher Wood, the firm’s top market strategist.

The departures have since spread beyond upper management. At least 32 staff in Australia and Hong Kong quit to join Jefferies Financial Group Inc. in June, while about 10 members of CLSA’s China Reality Research group moved to Credit Suisse Group AG. A handful of others have departed from the U.K. and Japan.

Zhang has struck an upbeat tone amid the upheaval. At a town-hall meeting in March, he acknowledged that some employees were disappointed by their 2018 bonuses but promised that the firm would deliver “first-in-class” pay if it meets certain targets. He also reiterated his commitment to international markets.

“I truly believe it’s only a matter of time before CLSA contributes to Citic’s overseas expansion,” he said.

The numbers point to an uphill battle. CLSA earned about US$27 million in the first five months of this year, missing internal projections by 58 per cent, according to figures seen by Bloomberg News. Goldman Sachs, by contrast, earned US$2.25 billion in the first quarter.

One of Zhang’s biggest challenges will be pushing CLSA beyond equities trading, a business that accounts for about half of revenue but is getting pummeled by falling transaction fees and reduced spending on research.

While CLSA has had some success in fixed income -- mostly on China-related issuance -- progress in investment banking has been slow. The unit’s revenue this year through May was just US$20.7 million, 55 per cent below budget. Prospects for near-term growth look dim as Chinese capital controls and U.S. President Donald Trump’s trade war curb appetite for deals.

Winning business outside China may prove particularly difficult now that the bulk of the firm’s international leaders have left. While Zhang tapped CLSA veteran Rick Gould as CEO, he filled most of the senior vacancies with people from Citic, who now account for five of the seven voting members on CLSA’s executive committee.

The firm may eventually have to scale back its global ambitions to focus on building a China-centric investment bank, according to Sanjay Jain, a Singapore-based analyst at Aletheia Capital Ltd., one of Asia’s biggest independent investment-research firms.

“CLSA can do well in China where it has the brand advantage and entrenched-player advantage,” Jain said. “Outside of that, it becomes challenging.”