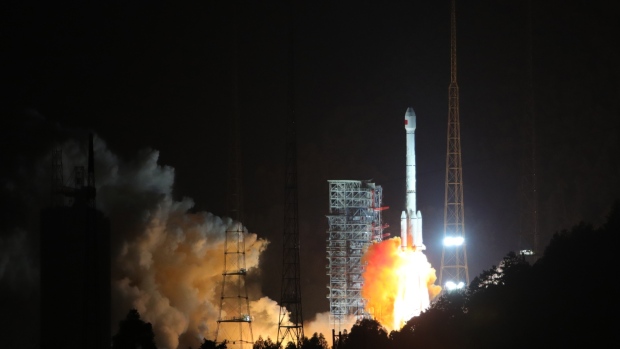 (Bloomberg) -- China’s space ambitions are shifting into a higher orbit.

Following its successful and world-beating trip to the far side of the moon, China is preparing to build a solar power station in space, as the world’s No. 2 economy strives to burnish its superpower credentials. With an $8 billion annual budget for its space program, second only to the U.S., China is seeking to compete with its rival for economic, military and technological dominance.

Scientists have already started construction of an experimental base in the western Chinese city Chongqing. Initially, they plan to develop a smaller power station in the stratosphere between 2021 and 2025, a 1 megawatt-level solar facility in space by 2030, and eventually larger generators, according to the state-backed Science and Technology Daily.

Here’s what China’s been doing in space:

The nation’s space scientists successfully landed a lunar probe on the far side of the moon on Jan. 3, capping a series of missions and giving a boost to China’s ambitions. Landing on the unexplored region will enable Chang’e-4, the rover named after the mythical Moon Goddess, to better study the moon because of the lack of electromagnetic interference from Earth. The vehicle is equipped with a low-frequency radio spectrometer to help scientists understand “how the earliest stars were ignited and how our cosmos emerged from darkness after the Big Bang,” according to China’s official Xinhua News Agency.

Reminiscent of the 2015 science fiction film “The Martian” starring Matt Damon, China’s lunar mission is also testing if the barren moon can support life. Pictures sent back from Chang’e-4 last month showed the first green leaf from cotton seeds nine days after the experiment was initiated, according to Chongqing University, which led the biological project. The test load on the mission carried cotton, canola, potato, yeast and fruit fly.

China has more such missions in the pipeline. Four more versions of the Chang’e probe are in the offing, with at least two of them planned for a landing on the moon’s south pole, according to Wu Yanhua, vice administrator of the China National Space Administration. The agency will also explore setting up a research base on the moon. A Mars probe is likely by the end of this decade.

China aims to build its own space station around 2022. Dubbed Tiangong, or Heavenly Palace, it will have a core module and two other modules for experiments, altogether weighing 66 tonnes and able to carry three people, with a designed life cycle of at least 10 years. The facility would be used for scientific research in a dozen areas including biology, physics and material sciences.

Taking its rivalry with the U.S. to the heavens, China is spending at least $9 billion to build a navigation system and cut its dependence on the American-owned GPS -- whose satellites beam location data used by smartphones, car navigation systems, the microchip in your dog’s neck and guided missiles. And, all those satellites are controlled by the U.S. Air Force, making the Chinese government uncomfortable. So, it has developed an alternative called the Beidou Navigation System, which eventually will provide positioning accuracies of 1 meter (3 feet) or less with use of a ground support system.

The Asian power is developing sophisticated space capabilities such as “satellite inspection and repair” and clearing up orbiting junk -- “at least some of which could also function” as weapons against U.S. satellites, the U.S. Defense Intelligence Agency said this month. China’s Foreign Ministry has said the U.S. allegations were “groundless.”

To contact Bloomberg News staff for this story: Dong Lyu in Beijing at dlyu3@bloomberg.net

To contact the editors responsible for this story: Anand Krishnamoorthy at anandk@bloomberg.net, Sam Nagarajan