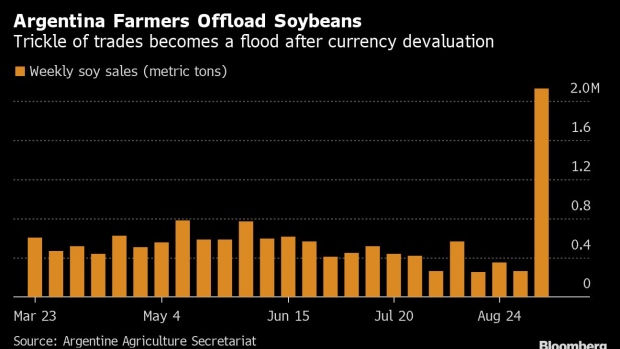 Soybeans are sold at a stall in a wholesale grains market in Shanghai, China, on Tuesday, June 16, 2020. Chinese soy processors need more soybeans for the fourth quarter and early next year as supplies from Brazil taper off seasonally. Photographer: Qilai Shen/Bloomberg , Bloomberg

(Bloomberg) -- China is redoubling its efforts to bolster food security by trying to cut the amount of soybeans that get turned into animal feed.

In a notice this week, the farm ministry identified feed grains as the most pressing problem for food supplies. It urged the feed sector to learn from some of the top producers that have successfully reduced the amount of soybean meal -- derived from crushing soybeans -- used in livestock rations as their main source of protein.

China is by far the world’s biggest importer of soybeans, which account for the bulk of its consumption. Last year, the import bill was over $50 billion, not counting smaller quantities of meal, shipped by far-flung suppliers in South America and the US. Those costs have risen further in recent months as food inflation has gripped the world in the wake of Russia’s war in Ukraine.

The wholesale price of pork, China’s staple meat, has risen by about two-thirds in the last year, in part due to higher feed prices. The move has caught the eye of the authorities and prompted the release of state reserves to cool the market.

So, even modest shifts in soy consumption would be helpful in controlling both import costs and inflation -- and represent a worry for the legions of overseas farmers that rely on Chinese demand.

The soy ratio in animal feed nationwide dropped last year to 15.3%, from 17.8% in 2017, the ministry said on Tuesday. That’s a cumulative saving of 11 million tons of meal, or 14 million tons of beans. Standout performers included farming giants Muyuan Foods Co., which lowered the ratio to just 6.9%, and New Hope Liuhe Co., which got it down to 10.7%.

The techniques employed by the companies include adding synthetic amino acids to feed and enhancing nutrition levels via fermentation.

China has massively increased its purchases from Argentina after the South American country devalued its currency for farmers, sparking a deluge of sales.