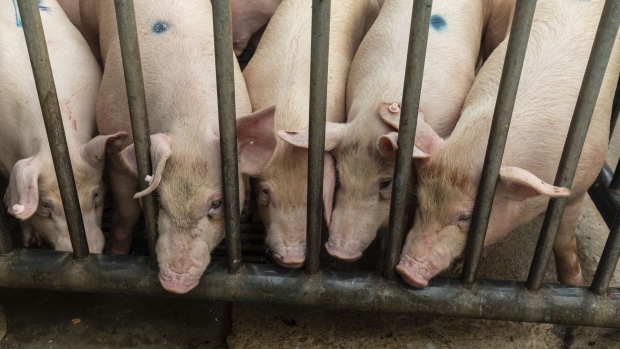 Pigs stand in a holding pen at a wholesale market in Nanning, Guangxi province, China, on Monday, Sept. 16, 2019. A protracted U.S. trade war, protests in Hong Kong, soaring food prices and the slowest economic growth in decades are among the many problems facing Chinese President Xi Jinping as he prepares to celebrate 70 years of Communist Party rule. , Photographer: Qilai Shen/Bloomberg

China will work to improve the genetics of its hog herd and other livestock in the coming decade with the aim of breeding animals that produce more meat and -- at the same time - consume less grains.

Sow herd productivity is about 30% lower than in developed countries and dairy cows produce only 80% of the milk than their peers in some leading markets, Shi Jianzhong, an official with the agriculture ministry’s National Livestock and Poultry Genetic Resources Committee told reporters on Wednesday. China has to rely on overseas stock to produce white-feathered broiler chickens, he said.

The drive to improve livestock genetics is part of China’s goal of relying less on imports to feed its massive and increasingly affluent population. However, the nation will continue to bring in animals from overseas to improve its domestic stock to catch up faster with advanced countries, said Chen Yaosheng, an official at the ministry’s National Pig Genetic Improvement Program.

See also: China’s Breeding Giant Pigs That Are as Heavy as Polar Bears

Millions of tons of feed grains will be saved and pressure on land will ease if hog quality can be improved to match that in advanced countries, said Sun Haoqin, another official on the livestock genetics committee. The move will also support China’s shift to industrialized hog and chicken farms, he said.

China flew in 10,433 live swine worth $25 million in the first quarter, with the imports mainly coming from Denmark and the U.S., customs data show.