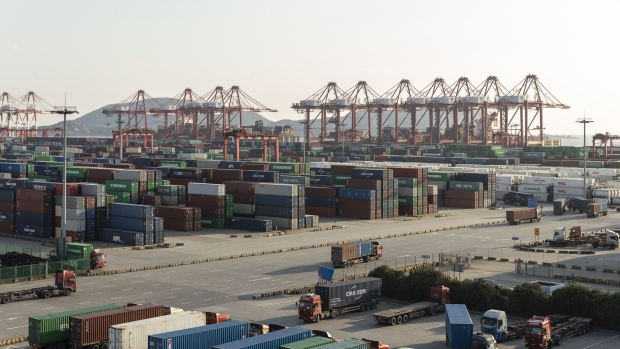 (Bloomberg) -- A rapid withdrawal of stimulus by some countries could hurt China’s exports, an official with the Ministry of Commerce said, as he warned of “unprecedented” difficulties ahead this year.

The outlook for international trade this year is clouded by uncertain demand as global economic growth is expected to lose steam amid Covid outbreaks, there are labor shortages, and supply chain disruptions and inflation are rising, Li Xingqian, head of the MOFCOM’s foreign trade department, told reporters at a Tuesday briefing.

“Global systemic risks are on the rise due to unbalanced economic recoveries,” he said in Beijing. “The overly fast withdrawal of stimulus policies by some countries could trigger contractions in demand, fluctuations in prices and in turn affect the exports of Chinese industry.”

China’s exports surged nearly 30% last year to a record high on the back of strong global demand, with the nation’s factories humming along while production in other countries was disrupted by virus outbreaks. But the growth is widely expected to soften this year due to difficulty in exceeding 2021’s record levels and a likely decline in demand for work-from-home technology and health care equipment as other nations return to more normal consumption patterns.

“Developed economies’ pursuit of reshoring of industries is dividing markets and reducing the efficiency of global resource allocation,” he said. China’s small exporters are squeezed by “sharply higher” costs and stalling profits despite rising revenues, he added.

Still, the government is confident that full-year trade growth will be kept within a “reasonable” range, helped by expanding new markets and a boost in credit for exporters which will strengthen their ability to deal with foreign exchange risks, Li said.