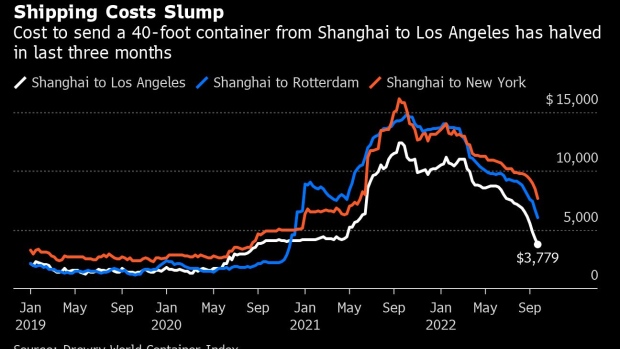 (Bloomberg) -- Overseas demand for goods from China is weakening as the global economy slows, warned a senior Chinese commerce ministry official, though the country still expects foreign trade to grow in the second half of this year.

“The slowdown in external demand is the biggest uncertainty faced by China’s trade,” said Vice Commerce Minister Wang Shouwen during a press conference Tuesday in Beijing. “Our companies are reporting falling orders, as the demand from major markets is declining.”

An export boom that has propelled China’s economy during the pandemic is showing signs of waning as soaring inflation and other headwinds elsewhere suppress global demand. Exports in US dollar terms expanded 7.1% last month, the weakest pace of growth since April when a lockdown in Shanghai disrupted ports and snarled trade.

Meanwhile, the cost of shipping goods from China has slumped to the lowest level in more than two years as the world economy stumbles.

Much of the growth in the value of trade now is due to rising prices, not to an increase in the amount of goods actually being put on ships. Shanghai’s port processed 8.4% less cargo in August than a year earlier, the port said earlier this month.

While Wang said China is confident it will achieve growth in foreign trade in the last six months of 2022, he cautioned that the economic slowdown in the US and Europe is a major headwind.

Elevated inflation among major economies has squeezed the consumption of goods in those places, while many overseas companies have been left with high inventories they still need to offload -- thus hurting new orders, Wang said. He added that the demand for work-from-home equipment spurred by the pandemic is declining.

The Chinese government has rolled out several measures to stabilize trade, Wang said, such as last month’s big stimulus package and support for cross-border e-commerce firms to build overseas warehouses, among other measures. He noted that rapid growth in some sectors, such as cars and solar batteries, has also demonstrated the country’s good foundation in trade.