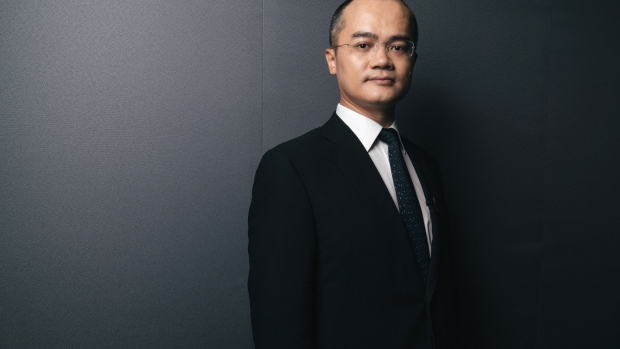 Wang Xing, chairman, chief executive officer and co-founder of Meituan Dianping, poses for a photograph ahead of a Bloomberg Television interview following the company's listing ceremony at the Hong Kong Stock Exchange in Hong Kong, China, on Thursday, Sept. 20, 2018. Meituan Dianping, the Chinese food delivery and neighborhood services giant, rose as much as 7.3 percent on its first day of trading after raising $4.2 billion in an initial public offering.

The State Administration for Market Regulation announced the investigation, which began recently, in a statement Monday. The antitrust watchdog is looking into alleged abuses including forced exclusivity arrangements known as “pick one of two.” The company said it will actively cooperate with the probe and step up efforts to comply with regulations. Its businesses are currently operating normally, it added in a statement.

The firm’s dollar bond spreads widened. The investigation into Meituan extends Beijing’s crackdown beyond Ma’s Alibaba Group Holding Ltd. and Ant Group Co., and threatens to chill the ambitions of founder Wang Xing, one of China’s most aggressive entrepreneurs. The government has become increasingly concerned over the growing influence of titans like Alibaba, Tencent Holdings Ltd. and Meituan over every aspect of Chinese life as well as the vast amounts of data they’ve amassed through providing services like online shopping, chatting and ride-hailing.

The antitrust campaign has gathered pace in recent weeks, as regulators slapped a record fine on Alibaba, instructed affiliate Ant to overhaul its business and ordered 34 of its largest tech companies -- including Meituan -- to rectify any anti-competitive business practices within one month. Following the meeting with SAMR, the Beijing-based firm issued a pledge to abide by antitrust laws, saying it will maintain market order and won’t force merchants to “pick one of two” -- forcing them to select betweens Meituan or a rival -- through unreasonable methods.

Meituan is unlikely to face penalties any harsher than Alibaba’s recent US$2.8 billion fine after being slapped with a monopoly probe, a sign that the regulatory dragnet is widening on the country’s tech behemoths. The interim period could be unnerving for its investors, but we think any penalty Meituan may pay will be commensurate with its smaller operational scale.

The firm, founded by 42-year old billionaire Wang, has long been criticized by rivals and merchants for alleged excesses like forced exclusive arrangements. The firm -- which competes against Alibaba’s Ele.me in food delivery -- had previously been found guilty of unfair competition in at least two legal cases this year and ordered to pay compensation, local media has reported. The corporation had also rejected allegations that it charged onerous commissions to restaurants during the COVID-19 outbreak last year.

Alongside Ele.me, Meituan also faced an online backlash after several delivery riders were killed or injured while trying to meet strict deadlines. It was among a handful of operators fined by the antitrust watchdog in March for giving improper subsidies to expand in the red-hot arena of community e-commerce.

Ahead of the probe, Meituan said it will raise US$10 billion in a record new share sale by a Hong Kong-listed firm as well as through an offering of convertible bonds. The firm had said it will use the funds to boost investments in new technologies like autonomous delivery as well as for general corporate purposes.

Under antitrust laws, Meituan could face a penalty of as much as 10 per cent of its revenue if it’s found to have violated regulations. Its 2020 revenue was about 114.8 billion yuan (US$17.7 billion). In contrast, rival Alibaba was fined US$2.8 billion, or about 4 per cent of its 2019 domestic revenues.

Wang, a coding guru whose methodical obsession with data and algorithms proved instrumental in humbling Alibaba’s rival meal service Ele.me, has openly telegraphed his ambitions. In a 2017 interview with local media, he said Meituan could join Alibaba and Tencent as the third member of a Chinese internet triumvirate in five to 10 years, due to the value it creates in food, travel and other services.

The billionaire last week described in a lengthy online post how he’ll funnel capital raised toward research into autonomous drones and delivery systems -- which analysts expect to fuel Meituan’s foray into the red-hot community commerce arena, where buyers in a local neighborhood enjoy bulk discounts. Meituan had been expected to wage a pitched battle of subsidies and sweeteners with Alibaba, JD.com Inc. and Pinduoduo Inc. for food and produce supply. 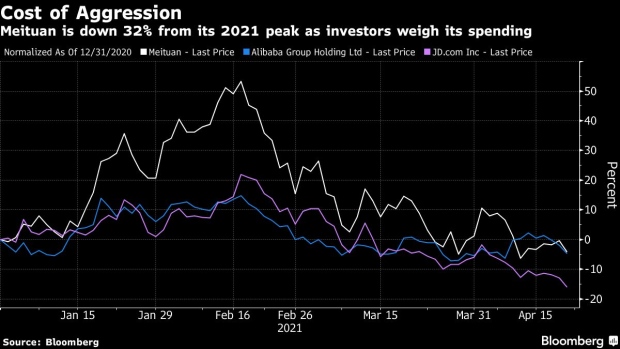 Meituan shares nearly tripled in 2020, making it one of the best-performing Chinese technology stocks. It’s dropped roughly 32 per cent from a February record, partly as China’s antitrust campaign accelerated and after the company flagged that it will incur more losses from its investments in newer businesses like online groceries.