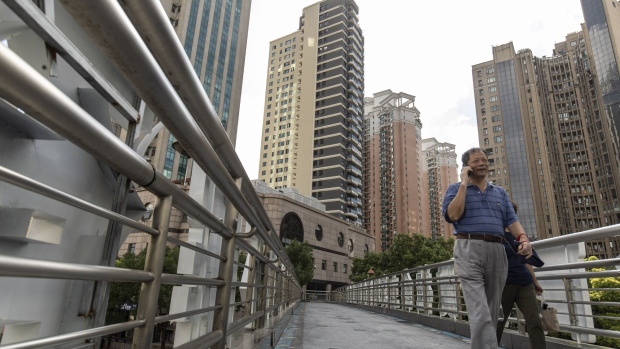 Pedestrians on an overpass near the Luwan 68 residential development by Fantasia Holdings Group Co., center, in Shanghai, China, on Friday, Oct. 8, 2021. Fantasia's surprise default on Oct. 4 -- despite earlier saying it had sufficient working capital and no liquidity issues -- has fanned concern that more developers will follow suit. , Bloomberg

The plan, approved by the National People’s Congress Standing Committee, China’s top legislative body, is designed to guide rational property buying and will last for five years, according to the report. The locations and number of areas where the trials will be undertaken were not specified.

Property prices in China have skyrocketed to unaffordable levels since private home ownership was introduced in 1998, and the government has faced an ongoing battle to control speculators. Authorities started property tax trials in 2011 in Shanghai and Chongqing, levying annual charges on second or high-priced homes.

READ: Why China Could Be Serious About a Property Tax Now: QuickTake

Residences owned by individuals are currently not subject to taxes, according to a law imposed in 1986, while there is an annual tax on commercial properties. Local governments earn income from developers mainly through land sales, collecting a total of 8.4 trillion yuan ($1.3 trillion) last year.

China’s new-home prices fell for the first time in six years and sales plunged 16.9% in September from a year earlier, as the country’s second-largest real estate developer, Evergrande Group, plunged into a debt crisis, which led to a property slowdown nationwide.