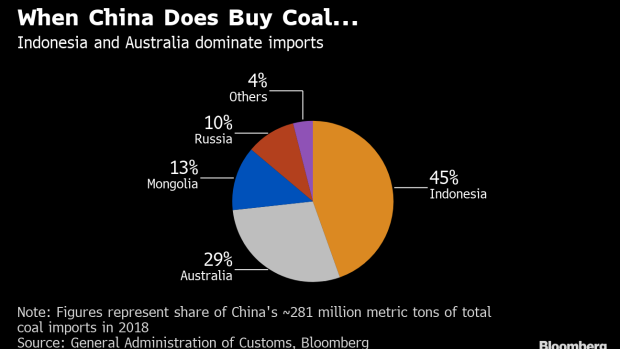 (Bloomberg) -- China will maintain a slowdown in coal imports from Australia until Beijing has assessed government policy in Canberra after federal elections in May, according to people with knowledge of the plan.

Chinese Customs in January told local officials to start controlling imports of Australian coal, without giving explicit instructions as to how or why. That’s resulted in delays to clearance at some ports and additional testing at others, prompting concern that Beijing is retaliating against Australia’s ban on Chinese telecommunications giant Huawei Technologies Co.

China will decide whether to maintain those controls after the May 18 poll depending on the policies of the newly elected government, said the people, asking not to be identified because they’re not authorized to speak publicly.

The timing will further bolster speculation that Beijing’s actions are politically motivated. Australia has been seeking to repair its relationship with its largest trading partner following a deterioration in ties after it banned Huawei Technologies Co. from bidding for 5G contracts and the introduction of anti-foreign interference laws aimed at China.

There’s no sign though that a change in government in Canberra would herald a significant shift in diplomatic relations with Beijing or the treatment of Huawei. Foreign policy isn’t a major election issue as Prime Minister Scott Morrison’s Liberal-National coalition government faces off with the opposition Labor Party, with tax and climate change taking top billing.

That’s not to say the spat with China has gone unnoticed. Morrison’s government last month announced the formation of the National Foundation for Australia-China Relations, which will use the private sector, industry lobby groups and non-government and cultural organizations to “turbo-charge our national effort in engaging China.”

Nobody answered calls to the spokesman’s office of China’s General Administration of Customs or an emailed request to the Australian government seeking comment.

Clearance of Australian coal through customs has been taking as long as 40 days, far more than the normal five to 20 days. Queensland-based miner New Hope Corp. last month said shipments are being diverted away from China as a result, while the China Coal Transport & Distribution Association said it expected the delays to remain at least until May.

Beijing has maintained there’s nothing unusual about its customs measures. Foreign Ministry spokesman Geng Shuang last month said China strengthened inspections of coal imports to protect the interests of its companies and the environment. The country has found issues with overseas coal after increasing monitoring and analysis, he said, declining to specify if supply from all countries is being tested.

The scrutiny on Australian coal also fits into broader efforts by Beijing that started last year to slow total imports of the fuel. China, the world’s biggest producer and user of coal, is expected to raise production for a third year, potentially crowding out imports. And management of its mammoth coal industry often includes adjusting import policies to support domestic producers or to keep prices in check.

While China is heavily dependent on imports for most of its commodity needs -- though not for coal -- it has shown it’s prepared to use its position as the world’s biggest buyer of raw materials as geopolitical leverage.

In addition to targeting Australian coal, China has slashed shipments of canola this year from Canada, its biggest supplier, citing quality control issues. There’s speculation that’s also related to Huawei, though in this case as retaliation for the arrest in December of the company’s chief financial officer in Vancouver at the behest of the U.S.

--With assistance from Jason Scott and Jing Yang.

To contact Bloomberg News staff for this story: Steven Yang in Beijing at kyang74@bloomberg.net

To contact the editors responsible for this story: Alexander Kwiatkowski at akwiatkowsk2@bloomberg.net, Ramsey Al-Rikabi