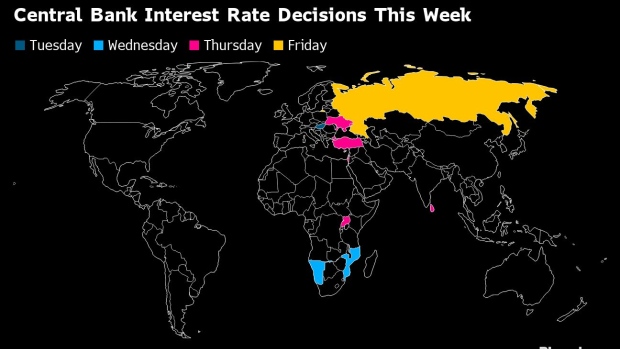 Office workers sit at tables outside a Shake Shack Inc. restaurant during lunch hour in the Lujiazui Financial District in Shanghai, China on Saturday, Oct. 10, 2020. China’s yuan strengthened and stocks rose on mainland exchanges in a positive start to the month for traders returning to work after an eight-day holiday. , Bloomberg

(Bloomberg) -- China is about to show the world that its economy is pulling further out of the chasm created by the coronavirus, setting it apart from other nations struggling to avoid renewed lockdowns.

Gross domestic product for the third quarter -- due Monday -- is forecast to come in at a 5.5% expansion from a year earlier, recovering all of the lost ground from the historic contraction in the first three months of the year.

Global trade has been an unexpectedly strong driver for the world’s second-largest economy, and even still-cautious domestic consumers are becoming more confident. That returning optimism is based on the nation’s success in keeping the virus practically at bay despite an occasional cluster emerging.

Yet even amid the strengthening domestic recovery, the prospect of renewed closures amid spiking infection rates in Europe and elsewhere comes with uncertain prospects for China, which has relied on exports and manufacturing to help spur its rebound. September data for industrial production, retail sales, investment and unemployment will give a clearer reading of underlying momentum.

“Improving consumer sentiment and consumption likely also boosted private demand. Leading indicators indicate demand is coming back at a faster pace than production at this stage of the recovery.”

Elsewhere, at least nine central banks from Russia to Mozambique deliver interest-rate decisions, while European activity indicators could signal growth is petering out.

Click here for what happened last week and below is our wrap of what else is coming up in the global economy.

In the U.S., figures on residential construction starts, previously owned home sales and weekly unemployment benefit applications are the highlights of a relatively quiet week for economic data. In addition, the Federal Reserve will issue its Beige Book -- a collection of economic and business activity assessments within each of the central bank’s 12 regions.

In Canada, investors will be watching for Monday’s release of the central bank’s business outlook survey as well as inflation data on Wednesday. Those reports will set up the Oct. 28 rate decision.

This week will offer more evidence of the euro area’s fading recovery, with flash PMIs forecast to weaken again in October. Those numbers will follow another flurry of European Central Bank speakers, giving investors final hints into their thinking before a quiet period sets in ahead of the ECB rate decision on Oct. 29.

In the U.K., inflation is set to rebound after the expiry of the government’s Eat Out to Help Out restaurant support program. Markets will also be closely watching Bank of England speeches for clues on a potential stimulus top-up early in November.

Hungary’s central bank holds its monthly and weekly rate decisions within the space of two days, with investors hoping for clarity about whether the two will move in tandem or diverge. Ukraine, meanwhile, will announce its key policy rate amid rising uncertainty over its independence, cooperation with the International Monetary Fund and a virus spike.

The Bank of Israel may cut its key rate below the current level of 0.1%, or opt to expand government bond purchases, as the country starts to emerge from a second national lockdown.

In Turkey, the central bank could hike for the second time in less than a month as inflation remains near double digits and real interest rates are still negative. The Bank of Russia is expected to stay on hold, but investors are watching closely for signs of whether its easing cycle is coming to an end amid the plunge in the ruble.

Namibia’s central bank will probably keep its key rate unchanged, after its South African counterpart did the same last month. Namibia’s benchmark is already lower than its neighbor’s, which could threaten the country’s reserves and currency peg.

Mozambique may also stay on hold because inflation has been ticking up. Uganda’s central bank may have some scope for easing as inflation started slowing and the economy is now projected by the IMF to contract this year.

Aside from Chinese GDP, other key releases in the region include Japan export figures and early Korean data for October, which will give the latest indication of how global trade is picking up.

Likewise, Japan’s PMI reading will offer a picture of how the manufacturing and service sectors are recovering. Inflation data is likely to show prices still falling there.

Mexico’s September unemployment report out Wednesday may show a third month of marginal improvement after joblessness rose to a near decade-high in June. A sluggish recovery that’s losing momentum suggests the trend level will remain elevated for some time.

Mid-month readings of inflation should find prices just within the target range in Mexico, while Brazil has a bit more room to spare even as its headline number may have nearly doubled since May.

As to output and demand, Argentina’s activity index looks set to post a sixth straight double-digit decline and Mexico’s retail sales report will underscore the scope of the demand-shock there.

Lastly, Brazil’s current account balance report out Friday may draw more than passing interest. The billions spent to prop up cash-strapped households all but ensures a record budget gap this year, and investors and credit rating companies have taken note of government in-fighting over austerity.