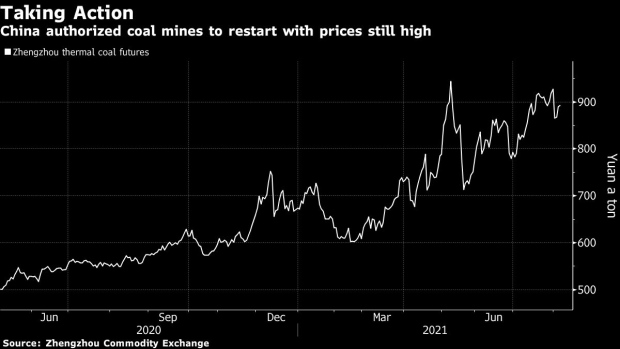 Operations will restart for a year at 15 coal mines across northern provinces including Shanxi and the Xinjiang region, delivering as much as about 44 million tons of coal, according to a statement by the National Development and Reform Commission. Authorities last week announced the restart of 38 coal mines in Inner Mongolia.

The decision comes as China seeks to tame thermal coal prices that have jumped about a third this year and hit a record in May amid supply disruptions and strong demand that’s the result of extreme summer heat and a rebound in industrial output.

It also follows last month’s recommendation from China’s top policymakers for an easing of aggressive steps to curb emissions as the nation seeks to meet power demand and maintain growth. Members of the Politburo have called for a coordinated, orderly approach to reach carbon neutrality, the official Xinhua News Agency reported.

Thermal coal futures on the Zhengzhou Commodity Exchange traded 0.5% higher at 894.2 yuan ($138.34) a ton at 11:00 a.m. local time. Prices are expected to stay elevated, with officials warning that China’s power shortage is poised to worsen.