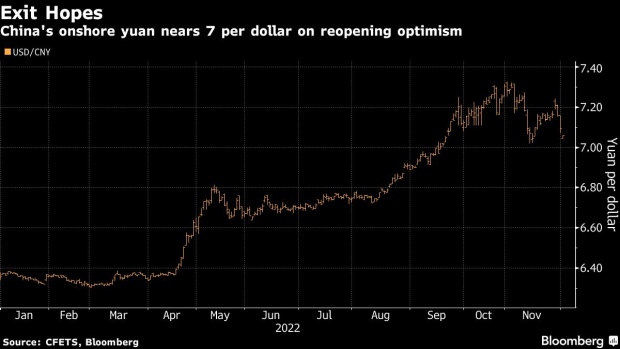 (Bloomberg) -- The yuan is closing in on a key milestone as hints of a China reopening fuel a burst of buying, but some analysts say the rally may soon pause.

The onshore yuan gained as much as 0.7% to 7.0450 per dollar on Thursday, approaching the 7 level it last reached in September. The rise was fueled by a softening in the Federal Reserve’s rate-hike stance and followed a 3% jump in November. Beijing’s move to allow some virus-infected people to isolate at home also underpinned the currency’s gains.

The advance may catch yuan skeptics by surprise, as only two of 32 analysts predicted the currency will be stronger than 7 per dollar by year-end. Signs that China may further ease its hardline stance on virus curbs are boosting sentiment, while an expected slowing of US rate hikes weighs on the dollar.

Read: Yuan Appears Set to Be a Victim of Covid Reopening: China Today

“The probability of yuan strengthening past 7 per dollar has increased significantly,” said Hao Zhou, chief economist at Guotai Junan International in Hong Kong. “China is optimizing Covid policy and Fed’s hawkish tone eased, which means the interest-rate gap between China and US may show signs of narrowing, and the US dollar is under short-term pressure.”

But, some analysts expect the yuan’s rally to cool as China’s exit from its Covid Zero strategy may be fraught with challenges. Citigroup Inc. sees the currency lagging its emerging-market peers in 2023, due in part to a widening services deficit.

“We remain somewhat skeptical of chasing the yuan higher,” said Viraj Patel, global macro strategist at Vanda Research in London. “A weak CNY is still an important policy tool for providing support to domestic exporters and authorities would likely lean against big CNY moves in either direction in this time of heightened uncertainty.”