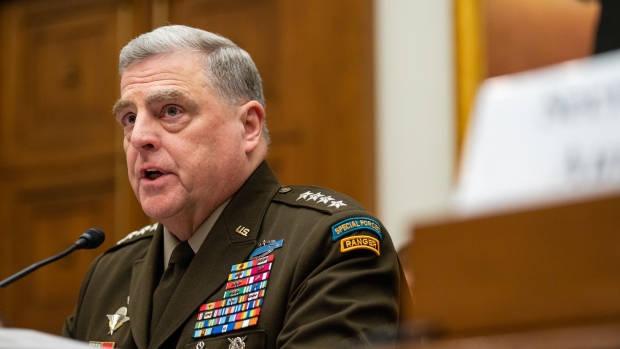 Mark Milley, chairman of the joint chiefs of staff, speaks during a House Armed Services Committee hearing in Washington, D.C., U.S., on Tuesday, April 5, 2022. The hearing is to discuss the Defense Department's budget requests for fiscal year 2023. , Bloomberg

(Bloomberg) -- The top US general said China’s military won’t be capable of invading Taiwan for some time, and President Xi Jinping would probably conclude attacking soon would be a disaster anyway.

Launching an invasion would be a “very difficult military operation to execute, and I think it’ll be some time before the Chinese have the military capability and they’re ready to do it,” General Mark Milley,  chairman of the Joint Chiefs of Staff, said at a Pentagon briefing on Wednesday.

He said the Chinese leader “would conclude that an attack on Taiwan in the near future would be an excessive amount of risk, and it would end in a strategic debacle for the Chinese military.”

Milley’s comments echoed his past remarks that while China may want to be ready for an invasion by 2027, its military isn’t ready yet. He said the US military remains the most lethal fighting force in the world and would stay that way “one, five years from now, 10 years from now and 50 years from now” despite China’s ambitions.

“We are militarily prepared, and one of the keys now is to make sure that Taiwan can defend itself, and there are a lot of lessons learned coming out of the Ukrainian war,” Milley said. “And one of the things people are learning is that war on paper is a whole lot different than real war. And when blood is spilled and people die and real tanks are being blown up, things are a little bit different.”

Speaking alongside Milley, Defense Secretary Lloyd Austin said he hoped China would open up its lines of communication with the US military. He raised the possibility of meeting with his Chinese counterpart when both are in Cambodia for a meeting of Association of Southeast Asian Nations defense ministers next week.

“We will both be in Cambodia here in the near future,” Austin said. “I don’t have any announcements to make in terms of any scheduled meetings, but there is an opportunity there, and so we’ll see how things play out.”