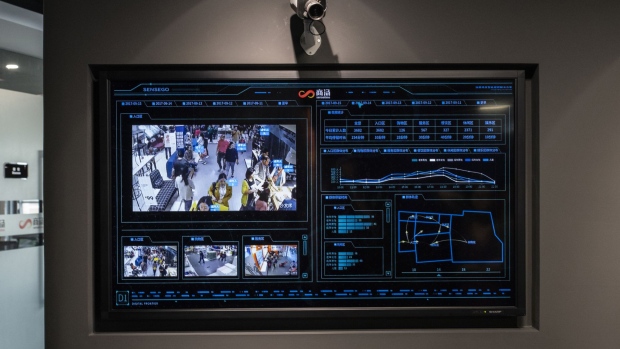 A screen shows a demonstration of SenseTime's SenseVideo pedestrian and vehicle recognition system in Beijing in 2018. , Bloomberg

(Bloomberg) -- The future of China’s largest artificial intelligence company was thrown into question last year when it was blacklisted by the Trump administration. Today, SenseTime is thriving with growing demand for its facial recognition software, especially as local governments in China adopt its technology to battle the coronavirus.

The Hong Kong-based startup’s revenue surged 147% to 5 billion yuan ($720 million) in 2019 and its customer base increased by about 500 to 1,200 clients, according to co-founder Xu Bing. Sales are on track to climb 80% this year to about 9 billion yuan and gross profit could double, according to people familiar with the matter.

“We see business demand for ways to mitigate the virus outbreak on the rise,” Xu said in a phone interview. He and SenseTime declined to comment on revenue projections in an emailed statement.

That momentum has SenseTime contemplating an initial public offering. The company is close to completing a $1.5 billion funding round that values it at about $8.5 billion pre-money, paving the way for a stock sale, people familiar have said. The company is leaning toward a dual listing in Hong Kong and China, the people added.

The Covid-19 pandemic has been extremely controversial ever since infections emerged in Wuhan eight months ago. Countries such as the U.S. blame Chinese authorities for censoring information about the outbreak that could have helped slow the spread. Now China’s economy is recovering quickly from the crisis, while the U.S. and many others struggle to get back on track.

Chinese authorities have succeeded by using laws and technologies that governments like the U.S. have resisted. When a cluster of Covid-19 patients flared up in northeastern China, the government installed sensors to guard the city’s subway entrances. The cameras provided by SenseTime detect whether the passengers are wearing masks, their temperature, and even their identities with their faces covered.

It’s an example of how the ruling Communist Party, once wary of private entrepreneurs, is now supporting technology companies that have come under attack from the Trump administration, including SenseTime, Huawei Technologies Co., Tencent Holdings Ltd. and ByteDance Ltd., parent of TikTok. The country has pledged to spend $1.4 trillion to develop its own tech industry and overtake the U.S. in key sectors.

In the case of facial recognition, concerns about privacy are taking a back seat while the country militantly traces and tracks outbreaks. Hard-line measures adopted by Beijing allow provincial governments, companies and residential complexes to deploy facial recognition devices with little resistance.

The temptation to use such technology more broadly against the virus has fueled privacy concerns. In April, more than 130 human rights groups published a letter cautioning against an expansion of surveillance powers. “States cannot simply disregard rights such as privacy and freedom of expression in the name of tackling a public health crisis,” it said in the letter.

till, business is booming for SenseTime. The SoftBank Group Corp.-backed company is working with 127 cities across China to use cameras to analyze everything from traffic to residential complex security. Its facial recognition program for subways, known as the Smart Commute System, is used in cities from central Zhengzhou and Xi’an to northeastern Harbin.

Passengers can opt to register with the cities’ subway apps to pay their transportation fee using face scans. That can allow them to be identified even with their masks on. The company declined to disclose how many people have selected the program, because the data sits with the respective city governments.

The technology is possible in part because SenseTime zooms in on data points on a person’s face not covered by a mask to enable identification, said Xu. And it’s not the only one working on such technology. Wuhan University, for example, said it’s developed competing software with 90% accuracy, according to a local media report.

“It’s data gravity that nobody can stop. China is pushing facial recognition across the nation during this pandemic,” said Isaac Mao, an angel tech investor. “In the U.S., there are roadblocks including civil society, privacy regulations and governance structure to push back on facial recognition and companies profiting from it are facing a backlash, but in China this is what’s missing.”