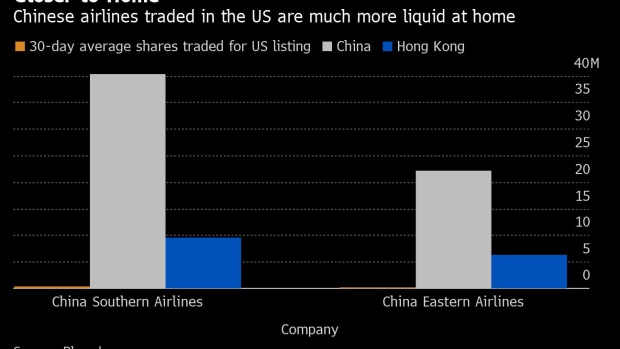 China Eastern Airlines Corp. aircraft at Hongqiao International Airport on Monday, Aug. 8, 2022. For many people, Covid is an inconvenience that’s become an undesirable part of normal life. Not so in China, where zero tolerance means those who contract the virus have been isolated and often disparaged just for getting infected. Photographer: Qilai Shen/Bloomberg , Bloomberg

(Bloomberg) -- The decision by five Chinese state-owned companies to leave US stock exchanges adds to skepticism that authorities in both countries can reach an agreement on disclosure rules, with analysts seeing state-controlled airlines as the next potential group to depart, possibly followed by internet giants.

China and Hong Kong are the only jurisdictions worldwide that don’t allow inspections by the US Public Company Accounting Oversight Board, with Beijing officials citing national security and confidentiality concerns. With a deadline for delistings set for 2024 for those firms that aren’t compliant, US lawmakers are considering passing a bill to bring it forward to next year.

The announcement on Aug. 12 by firms including China Life Insurance Co. and PetroChina Co. could “soon” be followed by China Eastern Airlines Corp. and China Southern Airlines Co., according to Redmond Wong, a Greater China market strategist at Saxo Bank. Shares of those carriers dropped 1.6% and 1.4%, respectively, in mainland trading on Monday.

Both airlines are controlled by the Assets Supervision and Administration Commission of the State Council (SASAC), the same entity that rules over four of the companies that disclosed their US-exit plans last week, he said. The carriers are among the Chinese companies identified by the US Securities and Exchange Commission as potentially facing delisting at the deadline, he added.

China Eastern Airlines raised $227 million in its US initial public offering back in 1997, while China Southern Airlines garnered $632 million the same year. Shares of both also trade in Hong Kong.

The state-owned Chinese firms seeking delisting from New York “is not a good sign for the auditing spat,” said Gary Ng, a senior economist at Natixis SA in Hong Kong. “It is likely to see more state-owned enterprises and private firms controlling a large amount of data to follow the same steps.”

Chinese internet and e-commerce firms will be in focus in coming weeks, Saxo Bank’s Wong said, given they hold a “huge amount” of potentially sensitive data on millions of Chinese individuals, public enterprises and institutions.

The plausibility of Chinese authorities making concessions to US regulators is “getting increasingly slim in the midst of pervasive Sino-American strategic competition,” Wong wrote in a note.

Announcements by companies voluntarily delisting doesn’t necessarily indicate that an agreement between authorities is more distant, said Shaun Wu, a partner of law firm Paul Hastings in Hong Kong. Rather, “many U.S.-listed Chinese companies may now be weighing the risks of delisting and enforcement by the SEC, and deciding how best to balance competing concerns.”