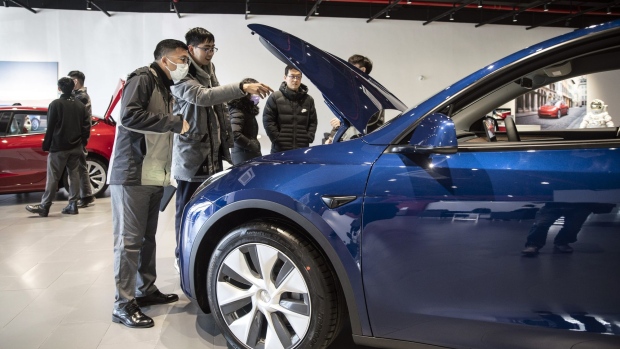 Customers look at a Tesla Inc. Model Y electric vehicle at the automaker's showroom in Shanghai, China, on Friday, Jan. 8, 2021. Tesla customers in China wanting to get the new locally made Model Y are facing a longer wait, signaling strong initial demand for the Shanghai-built SUV. , Bloomberg

(Bloomberg) -- Ningbo Tuopu Group Co. said it was the supplier of parts that prompted recent recalls of Tesla Inc. Model Y cars in China and the U.S.

Some front- and rear-suspension knuckles weren’t completely immersed in a liquid during the heating process, the Chinese auto-parts maker said in an exchange filing on Sunday. The potential of any knuckle being defective might be as high as 1%, it said.

There won’t be a major impact on Ningbo Tuopu’s operations or annual results from the recalls given their size and the defect ratio, the company said. It also vowed to work with Tesla to quickly test and replace defective products.

Ningbo Tuopu shares fell a combined 15% from a record high to start December, the biggest three-day decline since May. The stock is still up 49% this year.