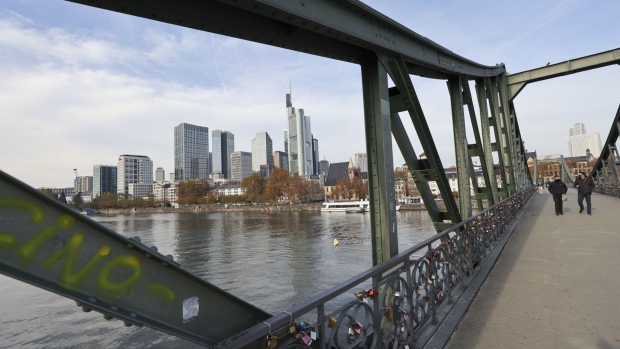 The Commerzbank AG headquarters on the skyline in the financial district in Frankfurt, Germany, on Wednesday, Nov. 10, 2021. Commerzbank said it has built in rising wages in its model when asked about the threat of a union strike. , Bloomberg

(Bloomberg) -- Chinese investment banks are looking to expand their operations in Germany as a largely moribund listings market in Hong Kong and growing tensions between Washington and Beijing encourage firms to consider overseas financing offerings in Europe.

Several companies, including Citic Securities Co. and Haitong Securities Co., are considering applying for licenses in Germany, which would enable them to offer various types of investment banking services in Germany and across the European Union, people familiar with the matter said, asking not to be identified discussing private matters. The deliberations are ongoing and subject to change, the people said.

Aided by an expanded cross-border listing program, Europe is becoming something of a magnet for Chinese companies seeking overseas financing. Growing geopolitical tensions are increasing the likelihood of a potential exodus of US-listed Chinese firms with three of China’s largest state-owned companies announcing plans to delist from US exchanges on Friday.

Read More: China State-Owned Giants Plan to Delist From US Amid Audit Spat

Last month, four Chinese companies including Gotion High-tech Co. raised a total of $1.6 billion after issuing global depositary receipts on Switzerland’s Six Swiss Exchange. At least six other Chinese firms have said they plan to list in the country in future.

Having tasted success in Switzerland, Chinese banks are eyeing Germany in anticipation of demand for Frankfurt listings via the so-called stock connect program. The mechanism, which initially allow listed firms in Shanghai and London to sell shares on each other’s venues, was expanded to include Germany, Switzerland and Shenzhen by Chinese regulators in February. No company has used the Frankfurt connect so far.

Germany has looked to attract Chinese listings in the past with a 2015 joint venture between Deutsche Boerse, Shanghai Stock Exchange and China Financial Futures Exchange creating the China Europe International Exchange. In 2018, home appliance maker Haier Smart Home Co. became the first and only Chinese company to list on the marketplace, which largely hosts exchange-traded funds.