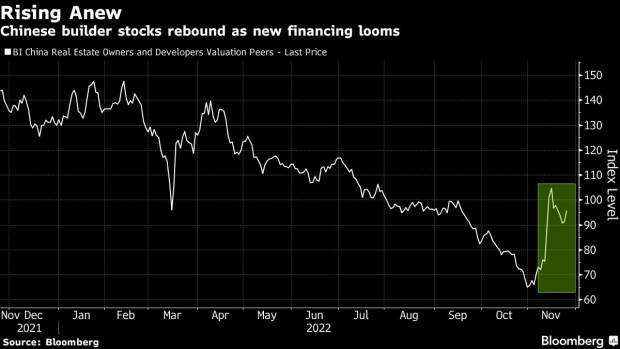 Residential buildings under construction at the Future City Hi Park residential project, developed by Sunac China Holdings Ltd., in Shanghai, China, on Tuesday, Nov. 8, 2022. Chinese developer Sunac is working with China International Capital Corp. on a plan to extend all of its onshore bonds, according to people familiar with the situation. Photographer: Qilai Shen/Bloomberg , Bloomberg

A Bloomberg Intelligence stock gauge of builders climbed about 7.25%, the most in 10 days, with Country Garden Holdings Co. jumping 20%. Gains in property firms’ dollar bonds were more selective, with investment-grade builder Longfor Group Holdings Ltd. leading outperformers along with Country Garden and Greentown China Holdings Ltd. The sector’s debt and equity had pulled back the past week following a surge to start November.

China’s mega state-owned banks are offering at least 270 billion yuan ($38 billion) in new credit to property developers including Country Garden and Longfor as part of the nation’s push to ease turmoil in the real estate market. That comes as builders are ramping up planned bond issuance under a state-guarantee program that first emerged in August.

Meanwhile, the People’s Bank of China and the China Banking and Insurance Regulatory Commission on Wednesday called for support in the property market and reiterated pledges to keep financing stable. The government also signaled that more monetary policy stimulus -- including a cut to banks’ reserve requirement ratio -- is on the table.

“The core of the policy is to build a firewall between developers that have already defaulted and those that haven’t,” said Li Kai, founder of Beijing Shengao Fund Management Co. “There will be limited impact on the defaulters, as the policy support is not targeting them -- but it would still boost their bond prices.”

Developers have defaulted on a record amount of dollar bonds this year, but onshore delinquencies have fallen sharply this year as many firms have reached deals with noteholders on payment extensions.

“Whether developers that defaulted offshore will avoid an onshore default primarily depends on their cash flows rather than policy help,” said Li.

--With assistance from Lorretta Chen.