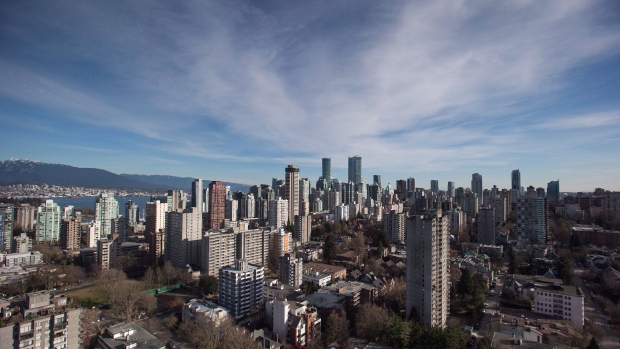 Condos and apartment buildings are seen in downtown Vancouver, B.C., on Thursday February 2, 2017. British Columbia's government is moving to ease the province's housing crisis by cracking down on tax evasion in the condominium market and giving municipalities more control over the protection and development of rental housing. , The Canadian Press/Darryl Dyck

Montreal was the hot Canadian real estate market for Chinese nationals last year as interest slipped in Toronto and Vancouver following the introduction of foreign buyers taxes, says a report from a website for buyers of overseas properties.

Juwai.com said Chinese buyers inquired about US$1.45 billion worth of Canadian properties in 2017.

Consideration of properties in Canada's largest city dropped by 25 per cent in 2017 after nearly doubling between 2015 and 2016.

Vancouver inquiries fell 18 per cent last year after growing by 9.3 per cent the previous year.

Metro Vancouver has had a 15 per cent tax on foreign home purchasers since 2016. The new provincial government hiked the levy to 20 per cent and imposed it in the Victoria and Nanaimo areas, as well as the Fraser Valley and central Okanagan.

A 15 per cent tax was imposed in the Greater Golden Horseshoe area -- stretching from the Niagara Region to Peterborough -- on buyers who are not citizens, permanent residents or Canadian corporations. In the first month after the tax was imposed in late April, foreign buyers made up 4.7 per cent of home sales in the region, according to Statistics Canada.

A separate report says no additional foreign buyers taxes are expected to be imposed in Canada and Australia this year, and New Zealand is the only major investment destination considering one this year.

Chinese were unfairly blamed for property price increases, the report's authors said, pointing to data that suggested other factors were at play, including historically low interest rates and population growth, said Juwai.

"After retreating from an exuberant peak in 2016 of US$101.1 billion, Chinese international real estate investment again appears to be on a growth path, although more steady and restrained that what we saw in that golden year," stated Juwai's Foreign Buyer Restrictions Report 2018-19.

Realtor Mike Donia of Re/Max Realty, who specializes in Asian buyers, says he has not seen any waning interest in Toronto real estate.

The foreign buyers tax had an initial impact on "mom and pop" buyers, but most Chinese will just purchase through a corporation to bypass the penalty, Donia added.

More than half of Chinese buyers considering Canada were motivated to invest for their own use, nearly 26 per cent for investment and 17 per cent for education, said Juwai.

Chinese parents often buy properties for their children studying overseas. Canada is a top education destination for Chinese students, hitting a record 138,467 in 2017 or 28 per cent of the international student population, said the report.

More than 40 per cent of wealthy Chinese buy property abroad to live in. Six in 10 intend to buy overseas properties over the next three years.

Canada is the second most popular emigration destination for high net-worth Chinese, with 64 per cent having already migrated or planning to move overseas.

Nearly ninety per cent of Chinese interest came from 153 cities in China, led by Beijing and Shanghai. Almost seven per cent lived in Canada.

Ontario attracted the most interest with inquiries for US$500 million worth of properties. The top four cities were Toronto, Ottawa, Waterloo and London.

It was followed by British Columbia at US$328 million with Vancouver leading, followed by Victoria, Richmond and Kelowna.

Quebec attracted views of US$112 million of properties. The largest interest was in Montreal and then Lachenaie northeast of Montreal, Laval and Westmount.

Inquiries in Alberta increased almost nine per cent last year, worth US$56 million, after increasing by 223 per cent in 2016.