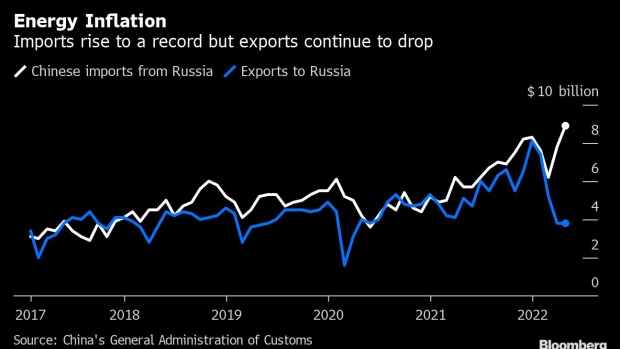 Workers walk past rolls of wiring at a construction site in Beijing, China, on Thursday, Nov. 8, 2007. High prices of copper may reduce China's demand for the metal used in cable and wire as some consumers turn to cheaper aluminum. , BLOOMBERG NEWS

(Bloomberg) -- Industrial commodities in China continued to slide as markets judge that Beijing isn’t doing enough to support demand, at least when compared to the government’s response to cratering economic activity at the start of the pandemic.

Some 76% of the economy has been affected by the spread of omicron, versus a 62% impact from the original variant two years ago, according to a note from Huatai Financial. However, the “relief measures adopted so far are surprisingly less strong than in 2020,” and have been “aimed at emergencies rather than supporting demand recovery in real-economy sectors,” Huatai said.

“Traders increasingly see a risk that we have all been waiting for Godot,” TD Securities said in a note, “as China’s pledge to support the economy fails to quell concerns while the nation prioritizes its zero-Covid objective.”

Oil and ferrous markets have recently borne the brunt of the slump. Copper and aluminum edged higher on Tuesday after a recovery in Chinese stocks helped sentiment, although traders warned that markets remain in a downtrend.

China’s flagging economy “could portend an imminent slump in its demand for crude oil,” said Bloomberg Intelligence. Extensive lockdowns are also a headwind for materials like aluminum and copper, according to Beijing Antaike Information Development. Futures of both metals in Shanghai have fallen this month and Antaike said that China’s aluminum demand in April recorded its biggest drop since March 2020.

The central bank has reiterated it’ll be proactive in addressing mounting economic pressures, including in the embattled property market. But crucially for commodities demand, doubts persist over the scale of the fiscal stimulus that Beijing intends to deploy to bolster growth. In any case, policy remedies will be much less effective while so much of the economy is either under lockdown or threatened with restrictions as the government pursues its goal of eradicating rather than living with the virus.

In the meantime, distress in the metals-intensive real estate sector is hardly abating -- China’s fourth-largest developer is approaching a possible default -- despite the government’s pledges of support. A further worry is the trade data on Monday that showed lockdowns hampering China’s exports, a key driver of the economy since the pandemic hit. If the world’s appetite for Chinese goods weakens because of a stumble in global growth, it would be another heavy weight on commodities demand.

Chinese imports from Russia surged to a record in April, likely due to soaring energy prices. Chinese companies bought $8.9 billion worth of goods, a 57% jump from a year ago. That rise came even though total imports were unchanged, underlining the closeness of ties between the two nations.

China’s lockdowns are fueling inflationary pressures due to supply disruptions and deflationary forces due to weaker demand. Together with shocks from the war in Ukraine, the crosscurrents are muddying the inflation outlook.

Chinese funds with a climate focus more than doubled their assets last year, passing the U.S. as the second-largest global market and bolstering Beijing’s push to meet its net-zero targets.