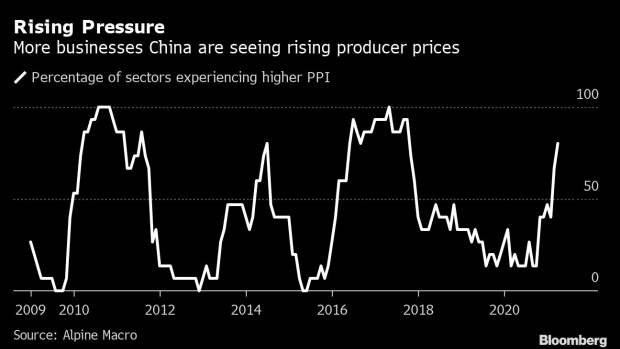 Workers sew garments on machines at the Prestige Clothing (Pty) Ltd. textile factory, operated by The Foschini Group Ltd., in the Maitland district of Cape Town, South Africa, on Thursday, Dec. 10, 2020. South African retailers including The Foschini Group and Woolworths Holdings Ltd. are increasing investment in local clothing manufacturers -- both to reduce a dependency on Chinese imports and secure a supply chain thrown into disarray by Covid-19 restrictions. Photographer: Dwayne Senior/Bloomberg , Bloomberg

(Bloomberg) -- Discover what’s driving the global economy and what it means for policy makers, businesses, investors and you with The New Economy Daily. Sign up here.

As China battles to contain surging commodity prices, there’s a key factor giving the central bank some breathing room: the link between producer and consumer prices has broken down.

Intense competition among smaller businesses, spurred by the rise of e-commerce, and soggy domestic demand means China’s factories are absorbing rising input costs rather than passing them on to consumers at home. Despite anecdotal reports of price increases, consumer inflation overall has been tame and looks set to remain that way.

Economists forecast data on Wednesday will show producer prices climbed 8.4% in May from a year earlier -- the fastest pace since 2008 -- while consumer prices rose 1.6%. That would be the widest gap between the two since 2017.

The failure of those pressures to spread through the economy is allowing the central bank to maintain the lower interest rates it introduced after the coronavirus struck China last year, while policy makers attempt targeted measures aimed at easing commodity shortages and limiting speculation.

That’s similar to the policy mix Beijing deployed in 2019, when consumer prices began spiking due to a shortage of pork resulting from African swine fever sweeping through China’s pig herd. This time, measures like releasing reserves from state stockpiles and increasing imports will have less of an impact, as the shortage of commodities is a product of a global pandemic and not limited to China.

Even so, the People’s Bank of China distinguishes between inflation driven by supply constraints and rising demand, with only the latter seen as a monetary policy issue, said Gao Ruidong, chief economist at China’s Everbright Securities. “The possibility of cost-driven inflation triggering tightening is minimal,” he said.

The PBOC has said the surge in commodity prices has little impact on consumer prices and it expects factory-gate inflation to stabilize later this year, as base effects, which are driving PPI higher, likely fade.

Just as the U.S. is going through a period of faster consumer price gains, China is experiencing its own spurt in prices at the factory gate -- most likely, a transient one. We think the People’s Bank of China sees it that way too, and -- like the Federal Reserve, according to our U.S. team -- will opt to ride it out.

Economists at BNP Paribas SA also see little pass-through from producer to consumer inflation, pointing out that food prices, which account for about a quarter of the CPI basket, are mostly a function of supply issues, such as weather, animal diseases or changes in imports. Industrial prices “have rather long chains to impact,” they wrote in a report.

China’s currency is another factor holding back tightening. Because Beijing has a policy of keeping the exchange rate of the yuan broadly stable against a basket of currencies, it tries to control the impact of higher rates on capital inflows from yield-chasing investors.

A central bank researcher recently suggested the yuan could be allowed to appreciate against the dollar to lower commodity prices for importers -- a move that could hint at monetary tightening. But the bank quickly rowed back on that suggestion.

Government-linked economists have warned of the risk of interest rate increases pulling in a wave of foreign cash created by loose monetary policy in the U.S. and Europe that could destabilize China’s financial system.

The biggest risk to this ‘no change in rates’ scenario is that companies stop absorbing rising input prices and start passing them on to consumers. And some already are. In the eastern province of Jiangsu, retail prices of televisions and air conditioners rose 20% in May compared with the same month in 2019, according to local media. Prices of paper have also risen.

“There could be a small window for interest-rate hikes if we continue to see strengthening in momentum of core inflation,” as well as a more robust recovery in investment spending by companies, Michelle Lam, Greater China economist at Societe Generale SA, said in an interview with Bloomberg TV this week.

There are also new factors at play since China’s last PPI spike in 2017, which left consumer prices almost unchanged. Years of disconnect between consumer and producer prices has left some manufacturers with razor thin margins and little room to further decrease their profits. China’s exports are surging at rates unseen for more than a decade due to the ongoing pandemic. That should give some added pricing power to exporters, according to Larry Hu, head of Greater China economics at Macquarie Group.

Domestically, retail sales growth hasn’t recovered to pre-pandemic rates and disinflationary trends in China are resurfacing. Beijing has relaunched its campaign to rein in total levels of debt in the economy, which since it was launched in 2015 has resulted in growth consistently falling short of the economy’s potential -- which means demand has not pushed against supply limits.

“Reforms since 2015 are inherently deflationary,” said Yan Wang, chief China strategist for Alpine Macro Inc. “The obsession with economic and social stability means that the government will take strides to control credit buildup, even at the expense of the economy running below potential.”

Beijing has slowed the pace of new loan growth after reviving its vow to stabilize debt-levels at the end of last year.

That quantitative control -- rather than raising rates -- should continue to dampen inflation, said Wu Howei, assistant professor of economics at the China Europe International Business School in Shanghai.

“Even if PPI reverts back to being a leading indicator for CPI, given the current CPI level, there is still a long way to go before monetary policy would tighten,” she said.