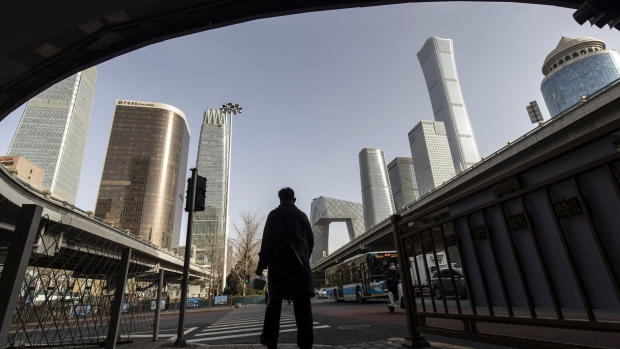 A pedestrian passes buildings in Beijing, China, on Friday, March 4, 2022. China will likely announce its lowest economic growth target in more than three decades when top leaders gather Saturday for a key political meeting, putting pressure on the government to step up fiscal stimulus to spur demand and jobs. Photographer: Qilai Shen/Bloomberg , Bloomberg

(Bloomberg) -- Hillhouse, the private equity firm known for its bets on Tencent Holdings Ltd. and JD.com Inc., is now looking to back startups far earlier in their life cycles.

The China-focused firm has set up a dedicated team with a mandate to seed 100 startups in three years, focusing on areas like new energy and biotechnology that have gained favor since Beijing cracked down on gaming and the consumer internet. Led by founding partner Li Liang, it will specialize in deals of $2 million to $3 million, far smaller than the investments the firm is generally known for.

Hillhouse began expanding the scope of its early-stage investments around the time it established VC brand GL Ventures two years ago. Beijing has since accelerated a nationwide campaign to develop cutting-edge technologies in areas from manufacturing to clean energy, part of a broader race for economic primacy with the US.

“Today’s early-stage investment has transitioned from ‘discovering value’ to ‘discovering and creating value’,” Zhang Lei, founder of the company, said in a statement. “Investment institutions need to truly go to the frontline of technological and industrial innovation.”

Founded by the Yale alumnus and billionaire about two decades ago, Hillhouse is one of the biggest backers of the Chinese internet today. Its private equity and VC arm has been a champion of fast-growing companies, often backing them from their early stages and holding large stakes for years in the same fashion as Chase Coleman’s Tiger Global Management and Philippe Laffont’s Coatue Management.