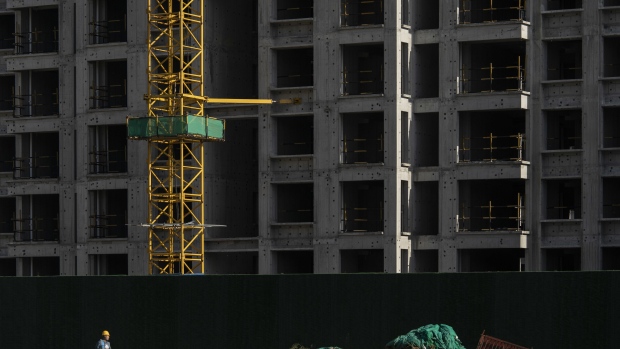 Apartment blocks under construction in the Nanchuan area of Xining, Qinghai province, China, on Tuesday, Sept. 28, 2021. China has urged financial institutions to help local governments stabilize the rapidly cooling housing market and protect the rights of some homebuyers, another signal that authorities are worried about fallout from the debt crisis at China Evergrande Group. Photographer: Qilai Shen/Bloomberg , Bloomberg

Days after defaulting on a dollar bond, Fantasia said Ho Man resigned, expressing concern “that he had not been kept fully informed of certain crucial matters of the company in a timely manner.” Another independent non-executive director, Wong Pui Sze, also left, saying she had no disagreement with the board.

The departures leave Fantasia with only one independent non-executive director. According to listing rules, it must have at least three, of whom at least one must have appropriate qualifications or accounting or related financial management expertise, the company said in a stock exchange filing. Fantasia will seek to fill the vacancies “as soon as practicable.”

Finding new directors will be a challenge for Fantasia, at a time Chinese developers are struggling to raise cash amid signs of contagion stemming from the crisis at debt-laden China Evergrande Group, the biggest issuer of junk bonds in Asia.

Fantasia’s shares and those of a unit have been suspended from Hong Kong trading since late last month pending an announcement on a proposed large asset disposal. The Shenzhen-based company said Oct. 4 that it failed to repay a maturing $205.7 million dollar bond, surprising investors after it earlier flagged that it had no liquidity issues.

“The latest director departure will make it hard for Fantasia to resume trading,” said Mike Leung, an investment manager at Wocom Securities Ltd. “As the company is heading toward debt default and probably delisting, few people with a decent reputation to stabilize investor confidence would be willing to devote oneself to the game.”

Fantasia said on Friday that it appointed Houlihan Lokey (China) Ltd. as a financial adviser to assess its capital structure, evaluate its liquidity and explore all feasible solutions to ease the cash crunch.