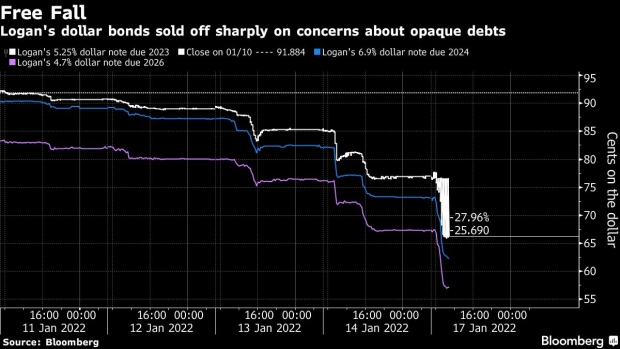 Logan’s dollar note due 2023 sank 10.8 cents to 66.1 cents as of 10:50 a.m. in Hong Kong, leading declines among Chinese developers. Its shares fell 3.2%. Other junk rated property bonds fell about 3 cents on the dollar Monday morning, according to credit traders.

The developer, which is China’s 20th-largest by contracted sales, on Friday denied rumors that it had privately placed debt after concerns over its obligations prompted a broad selloff across its dollar notes. Logan also denied a Debtwire report published later that day that claimed the firm provided guarantees on two loans and two credit-enhanced notes. The report stated Logan could be on the hook for $812 million of guarantees on outstanding obligations due through 2023.

Logan holds the equivalent of a double B rating from all three major credit risk assessors and some of its notes traded at par just last month. The company and its subsidiaries have some $1.3 billion of local and offshore notes coming due this year, Bloomberg-compiled data show, including a 2 billion yuan ($314.6 million) due Feb. 1.