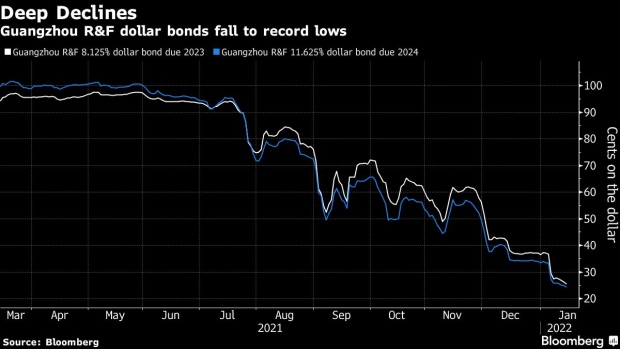 Construction cranes surround a residential tower being developed by Guangzhou R&F Properties Co. in the Nine Elms and Vauxhall districts in London, U.K., on Tuesday, May 12, 2020. The pandemic has crushed hopes of a recovery in Londons housing market after years of sustained declines. , Bloomberg

(Bloomberg) -- Guangzhou R&F Properties Co. has been downgraded to restricted default by Fitch Ratings after the Chinese developer completed what the credit risk assessor considers a distressed debt exchange.

The tender offer and consent solicitation were necessary for the company to avoid a default, according to a Fitch report Friday afternoon.

Guangzhou R&F bought back just 16% of a $725 million dollar bond which was originally due Thursday and extended the rest by six months, underscoring the company’s liquidity shortage. The company initially said it planned to set aside about $300 million for the bond repurchase before saying it had “materially less” money than expected to repurchase notes.

Concerns about the firm -- whose businesses include property development, management and hotel services -- have flared in recent months. Prohibitively high borrowing costs for lower-rated builders like Guangzhou R&F have shut many developers out of the overseas credit market, making it effectively impossible to refinance their offshore bond obligations. That’s adding to property sector stress as sales across the nation slump.

Guangzhou R&F had not met any of the three metrics as of the first half of 2021, according to calculations by Bloomberg.

Separately, S&P Global Ratings downgraded unit R&F Properties HK Co. to selective default late Thursday, calling the debt extension a “distressed restructuring” and “tantamount to a default” because of the firm’s otherwise limited options to pay off the note.