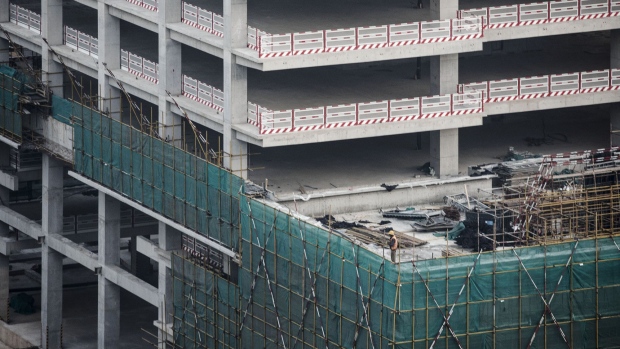 A worker stands on a platform at a building construction site in Beijing. , Bloomberg

(Bloomberg) -- The Chinese developer Oceanwide Holdings Co. says a lender’s lawsuit caused a unit to default on $215 million of bonds, the latest sign of stress in the Asian’s nation’s property debt amid China Evergrande Group’s woes.

A suit brought by the Shanghai branch of Bank of Beijing Co. demanding “accelerated repayment” of a $69.3 million loan caused Oceanwide Holdings International Development III Co. to default on the 12% notes due this year, the developer said in a statement to Hong Kong’s stock exchange Friday. The statement did not provide details on the legal action.

Trading in the notes has been suspended since May 25 and will remain so until further notice, the statement added.

While investors around the world are watching to see how the crisis around cash-strapped Evergrande is resolved, Oceanwide Holdings has been trying to sell its main office complex in Beijing to raise cash after Oceanwide Holdings International Development III defaulted in May.

A Hong Kong-based development subsidiary of China Oceanwide Holdings has also been warning in regulatory filings this year that if it can’t complete plans to bolster its finances it might not be able to continue to “operate as a going concern.”

An Oceanwide unit has also paused work at a site in San Francisco, leaving a hole in the ground where it hoped to build the city’s second-tallest skyscraper. Altogether, China Oceanwide Holdings has spent $3.5 billion on U.S. investments that are idle or nowhere near finished.