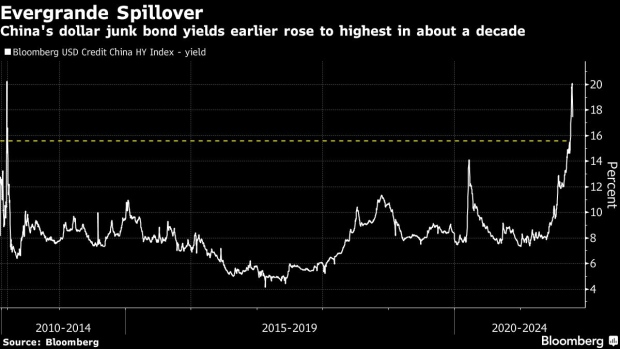 A worker installs safety netting at an apartment block under construction in the Nanchuan area of Xining, Qinghai province, China, on Tuesday, Sept. 28, 2021. China has urged financial institutions to help local governments stabilize the rapidly cooling housing market and protect the rights of some homebuyers, another signal that authorities are worried about fallout from the debt crisis at China Evergrande Group. Photographer: Qilai Shen/Bloomberg , Bloomberg

Sinic’s credit rating was lowered by S&P Global Ratings to Selective Default from CC after the company failed to repay the interest and principal of its $250 million note due Monday, according to a statement dated Tuesday.

Sinic warned earlier this month it didn’t expect to repay the dollar bond and that may trigger cross-default on its two other notes. The news follows a surprise default by developer Fantasia Holdings Group Co. earlier this month. China’s real estate market has been rocked by a crisis at Evergrande, as authorities try to cut leverage in the sector and prevent a bubble.

“We expect this nonpayment to trigger cross defaults and accelerate demands for repayment of the company’s other debts, including its U.S.-dollar bonds and domestic loans, some of which are already overdue,” S&P Global said in the statement.

Sinic is much smaller than Evergrande, ranking 41st in a list of China’s biggest property developers by contracted sales as of August, compared with its bigger peer at third. Sinic has $694 million in dollar bonds outstanding, according to Bloomberg-compiled data. The firm missed domestic payments in September.

A 30-day grace period for Evergrande to pay interest payment deadlines on several dollar bonds will end this week, raising the specter of the real estate giant defaulting.

A government clampdown on the property industry is making it harder for companies to refinance and threatening to create a wave of defaults. The yield on junk dollar bonds from the nation’s borrowers climbed to a decade-high of about 20% this month before dropping to 17%, while the issuance of dollar securities from China down in October to the lowest since 2015.

Beijing finally broke its silence on Evergrande’s trouble last Friday and reiterated over the weekend that the risk can be contained. But analysts from Citigroup Inc. said in a note on Monday that “more decisive policies are still needed to shore up market confidence in the property sector.”