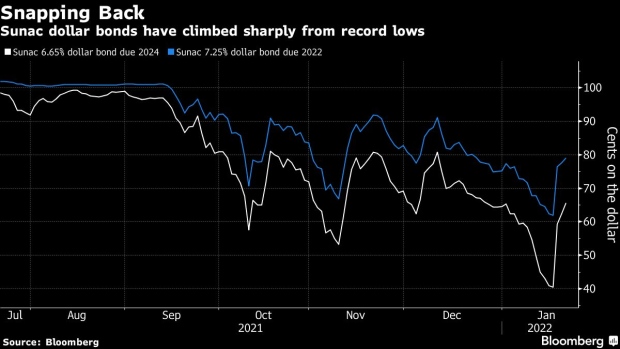 (Bloomberg) -- China’s third largest developer by sales received its second credit downgrade in as many days, highlighting concerns over builders once perceived as safer bets.

Sunac China Holdings Ltd. was dropped a notch to BB- by S&P Global Ratings on Friday, following the same move by Fitch Ratings the previous day. Both credit assessors’ outlook is negative. They cited uncertainty about the developer’s 2022 liquidity, with S&P saying that though it believes Sunac can meet this year’s debt maturities, “the margin of error is eroding.”

Fitch said Thursday that Sunac’s access to debt capital markets is “largely closed.” The builder sold shares at a 15% discount earlier this month, sending its shares and dollar bonds plunging. The firm subsequently announced it had no short-term plan to issue any further shares.

S&P’s afternoon downgrade announcement didn’t cut into Friday gains for Sunac’s stocks and debt. Shares rose more than 4% and dollar bonds maintained an increase of nearly 3 cents on the dollar, according to prices compiled by Bloomberg.