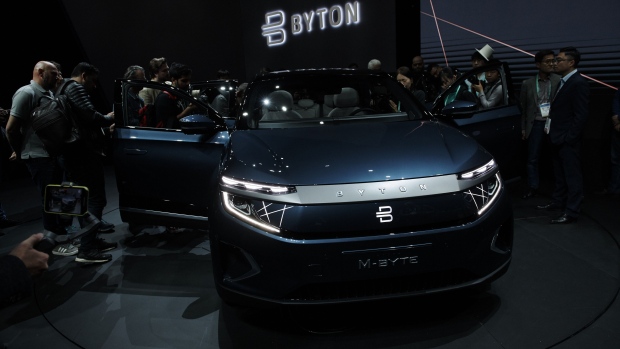 (Bloomberg) -- Byton Ltd., the Chinese electric-vehicle startup that has plotted a U.S. entry for years, is suspending all domestic operations and furloughing staff after the coronavirus pandemic made it tougher to get its business off the ground.

The suspension starts July 1 and is set to last six months, closely held Byton told staff in an email seen by Bloomberg News. The company invited employees to resign in writing by June 30 and said it is making efforts to obtain funding to pay salaries owed to workers. Those who resign would have priority in being paid.

Byton is one of the highest-profile Chinese EV startups to see its troubles exacerbated by the pandemic, which has hit demand for cars and other consumer goods. Even before the virus broke out, Byton struggled to meet announced deadlines to start producing and delivering its first model.

Home to the world’s biggest EV market, China encouraged companies to get into the business with subsidies and other support, spurring fears of a bubble. New carmakers have come under pressure since the government started scaling back that aid last year and as Tesla Inc.’s locally built sedans grabbed more market share.

Founded by former BMW AG managers, Byton has about 1,000 employees in China and about 500 in other countries, including the U.S. Its investors include state-owned China FAW Group Corp. and battery giant Contemporary Amperex Technology Co. Ltd., which has a deal to supply batteries to Tesla.

In the letter to staff, the company cited great challenges in financing and production caused by the virus outbreak and other factors. Reducing staff costs are part of a strategic restructuring, during which Byton will retain some workers to maintain its basic operation, a company representative told Bloomberg.