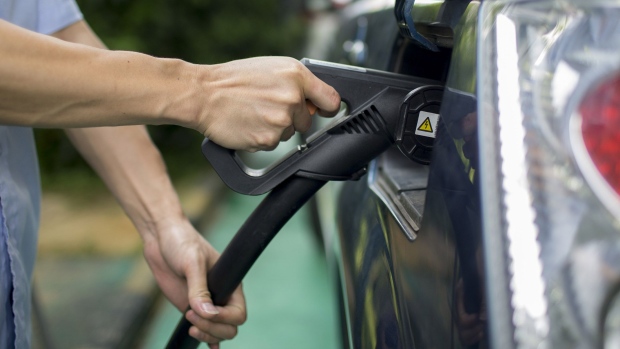 A Baojun E100 electric vehicle stands plugged in to a charging station outside a SAIC-GM-Wuling Automobile Co. Baojun E100 Customer Experience Center, a joint venture between SAIC Motor Corp., General Motors Co. and Liuzhou Wuling Automobile Industry Co., in Liuzhou, Guangxi province, China, on Wednesday, May 23, 2018. GM and its partners sold 4 million vehicles in China in 2017, about 1 million more than the automaker sold in the U.S. , Photographer: Qilai Shen/Bloomberg

BYD Co., China’s biggest maker of electric cars and other new-energy vehicles, slid as much as 2.2% in Hong Kong, its biggest loss this month. The shares were trading at HK$38.75 at 10:04 a.m. local time. BAIC BluePark New Energy Technology Co., the country’s biggest maker of pure electric cars, fell as much as 2.8% in Shanghai to 5.31 yuan. Contemporary Amperex Technology Co. Ltd., the world’s biggest car-battery maker, retreated as much as 2% to 74.11 yuan. Hong Kong’s Hang Seng Index was down 1.7% and the Shanghai Composite Index lost 1%.

China may cut subsidies for electric vehicle purchases again, though it will first gauge demand for the automobiles before coming to a decision, Bloomberg reported Friday, citing people familiar with the matter. The government, which began subsidizing EV purchases in 2009 to promote the industry, has been gradually reducing handouts in the past few years to encourage automakers to compete on their own.

China’s car market is experiencing a prolonged slump in demand, and that’s dragged down the global EV sector as the country accounts for about half of the world’s sales of electrified cars. Still, regulators continue to face pressure to reduce handouts as state support fueled concerns about a bubble in the industry.

The latest funding cut took effect in June, when the government cut subsidies of as much as 50,000 yuan ($7,142) per EV by half. Chinese NEV sales then began falling in July and have been dropping since. China’s top EV makers have slashed earnings outlooks and analysts have recently questioned whether the likes of Shanghai-based NIO Inc., once regarded by many as China’s Tesla Inc., will survive.

Warren Buffett-backed BYD last month reported an 89% decline in third-quarter earnings and warned profit could fall as much as 43% this year. BAIC BluePark also forecast a 2019 loss in a grim earnings update.