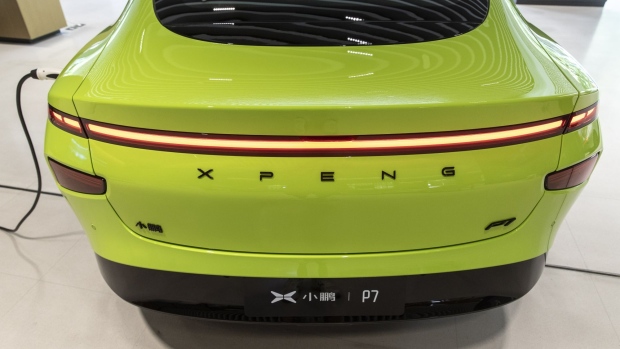 Chinese electric-vehicle maker Xpeng Inc. reported a bigger loss than the market was expecting for the third quarter as costs related to research and development and selling expenses jumped.

The Guangzhou-based company, which is listed in the U.S. and Hong Kong, unveiled a net loss of 1.59 billion yuan ($249 million) for the three months through September, versus a 1.15 billion yuan loss a year earlier and a 1.19 billion yuan deficit the previous quarter. Analysts on average had forecast a loss of 1.09 billion yuan.

Revenue increased to 5.7 billion yuan, beating the company’s guidance of 5 billion yuan and bettering average analyst expectations for 5.2 billion yuan. Gross margin for the three-month period was 14.4%, better than the second quarter’s 11.9% and the 13.4% the market expected.

“We continued record-setting growth with the highest vehicle deliveries among China’s startup new energy vehicle automakers,” Chief Executive Officer He Xiaopeng in a statement Tuesday. “This outperformance testifies to the market’s recognition of the differentiated value our vertically integrated in-house developed software and hardware bring to our vehicles.”

Xpeng delivered 25,666 of its G3 sports-utility vehicles and P7 sedans in the period, 14% higher than the upper end of its outlook in August. The carmaker, founded in 2014, released a fourth model -- the G9 SUV -- at the Guangzhou auto show last week, a larger sports-utility vehicle pitted more directly against Tesla Inc.’s Model Y and Nio Inc.’s ES series.

Even though automakers globally have been plagued by a chips shortage, which has lasted almost a year now and cost the industry around $210 billion in lost production, according to consulting firm Alix Partners, it’s been a banner 12 months for China’s car market. EV sales this year are in line to more than double 2020’s total and reach 3 million.

Gu said in an interview with Bloomberg TV in August that he hopes the company will start posting profits in two to three years. The company invested 1.26 billion yuan in R&D last quarter, doubling the expense in the same period a year ago. Selling, general and administrative costs rose 28%.

Looking forward into the final stretch of 2021, Xpeng said it expects another record quarter for vehicle deliveries, which should range between 34,500 and 36,500 units. Revenue for the fourth quarter may be as high as 7.5 billion yuan.

The company’s shares have risen about 11% in the U.S. this year. Xpeng’s stock debuted in Hong Kong in July, after a $1.8 billion raising. The automaker said that it planned to use the proceeds from its Hong Kong share sale to expand its product portfolio and develop more advanced technologies, as well as boost its presence in international markets.