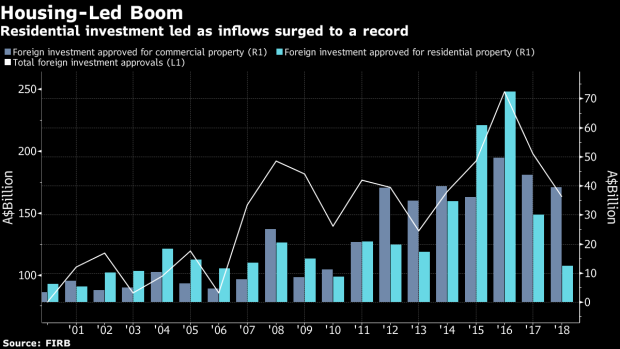 In Wong’s core market of Chatswood, a suburb north of Sydney’s harbor bridge where a third of residents claim Chinese ancestry, his sales have slumped by as much as half from their peak. That’s reflected in recent government data showing China is no longer Australia’s biggest foreign investor amid a plunge in property purchases.

“There are two main factors behind the drop,” said Wong, who estimates 90 percent of his sales in Chatswood are to Chinese buyers. “The first is people not being able to get the money out of China, and from mid-2017 China’s economy started to slow and that also had an effect.”

Chinese appetite for apartments and harbor-side mansions helped drive an east-coast property boom that saw Sydney house prices soar 75 percent in the five years through mid-2017. The rally was also fueled by limited supply, rapid population growth and low interest rates. But since then, prices in Australia’s biggest city have dropped 13 percent.

Reserve Bank Governor Philip Lowe noted the withdrawal of foreign buyers in a speech Wednesday as he sought to explain the drivers of Australia’s property slump. The central bank is closely watching the decline, especially as it’s starting to impact household spending and slow the economy.

“Another demand-side factor that has influenced prices is the rise and then decline in demand by non-residents,” said Lowe. “The timing of these shifts in foreign demand has broadly coincided with –- and reinforced –- the shifts in domestic demand.”

While Chinese buyers helped inflate the property bubble, they’re unlikely to return in sufficient numbers to stabilize the market. For one thing, shifting money abroad from China is tougher these days as authorities there are strictly enforcing rules aimed at curbing capital outflows.

There are other domestic factors suggesting prices could keep declining too. Australian banks have turned gun-shy on lending following an inquiry that exposed widespread misconduct in the industry and more homes are coming to the market.

Chinese investment in Australia has surged since the turn of the century as buyers snapped up assets from mines to farms. In recent years, attention increasingly turned to real estate, driven by the appeal of Australia’s clean environment and a surge in Chinese students attending university there, encouraging parents to buy homes for their children.

The Chinese didn’t just favor Australia. Investors embarked on a shopping spree that helped inflate asset prices around the world, snapping up everything from luxury condominiums in Canada to resorts in Hawaii and skyscrapers in London.

Things got tougher for Chinese buyers when Beijing imposed capital controls to help stabilize its currency, limiting the amount companies and individuals could move abroad. Adding to this, Chinese authorities have been reining in a borrowing spree at home, allowing the economy to cool from the breakneck pace of the past in order to maintain financial stability.

Wong estimates the withdrawal of the Chinese probably accounts for about a quarter of the drop in Chatswood house prices. As to whether Australia still appeals to Chinese buyers, he reckons there’s nothing to fear there.

“Australia is still in the top two or three that Chinese are looking to migrate to overseas,” he said. “It’s just really a matter of whether they have the money, and if they do, whether they can get it out.”

--With assistance from Garfield Reynolds and Kevin Zhang.