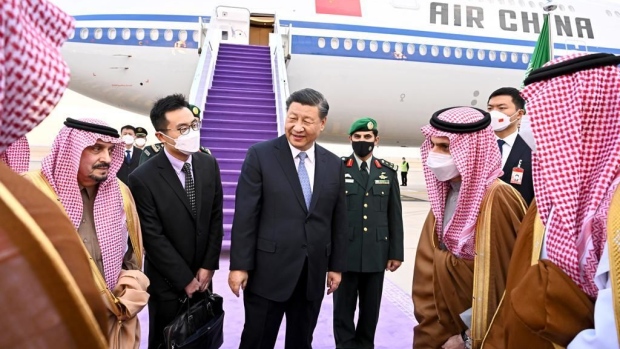 (Bloomberg) -- China and Saudi Arabia agreed to hold regular summits between their leaders, solidifying ties between the world’s No. 2 economy and its top supplier of oil.

In a meeting in Riyadh on Thursday, Chinese President Xi Jinping and Crown Prince Mohammed bin Salman agreed to hold summits every two years as they upgraded the relationship to a comprehensive strategic partnership, the official Xinhua News Agency reported.

The two nations also signed slew of energy and investment pacts, though details details on those were scant. They announced plans to synchronize Xi’s signature Belt and Road infrastructure program with the kingdom’s Vision 2030, which aims to wean the economy off a reliance on oil.

Taken together, the moves show a willingness for the two countries to strengthen relations just as both see ties with the US cool. In October, President Joe Biden accused Riyadh of allying with Russia on oil production cuts, vowing unspecified “consequences.” Total US-Saudi trade shrank from some $76 billion in 2012 to $29 billion last year.

The two countries will strengthen collaboration at the United Nations, the Group of 20 and the Shanghai Cooperation Organization, Xi wrote in an editorial in Saudi newspaper Al Riyadh.

China’s engagement with the region shows it is illustrating that “an alternative world order” can exist, said Raffaello Pantucci, a senior fellow at the S. Rajaratnam School of International Studies at Nanyang Technological University in Singapore.

“It suits both Riyadh and Beijing to highlight they have other options to the US, or important partnerships on the world stage that do not include the West,” he said.

Neither Saudi nor Chinese state news outlets provided many details about the agreements that were signed, beyond saying that others involved sectors such as information technology, cloud services, medical industries and construction.

These included an agreement with China’s Huawei Technologies Co. on cloud computing and high-speed internet complexes in Saudi Arabia. Last month, the Federal Communications Commission moved to seal off Huawei from the US market for telecoms equipment.

EXPLAINER: Understanding the Ups and Downs of US-Saudi Relations

The Saudi investment ministry and Shandong Innovation Group Co. also inked an agreement to build an aluminum plant, and the Saudi government said it signed an MOU to set up a hydrogen cracking project.

Saudi Arabia has started work on a large facility for green hydrogen in Neom, a Red Sea city under construction. Green hydrogen, a fuel seen as crucial to the global transition to cleaner energy, will be generated using solar and wind power.

--With assistance from Rebecca Choong Wilkins.