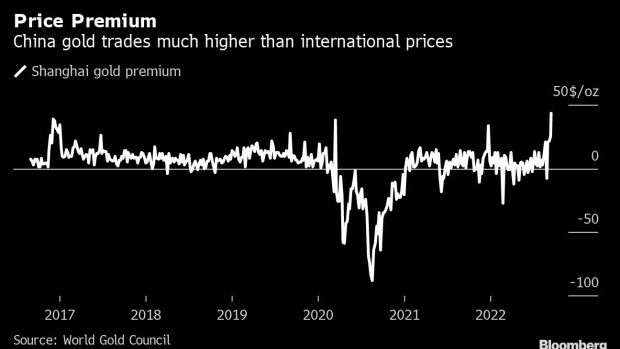 Gold bangles sit inside a display case at a Chow Tai Fook Jewellery Group Ltd. store in the Central district of Hong Kong, China, on Friday, Jan. 20, 2017. Chow Tai Fook, the world's largest jewelry chain, last year launched the first of a line of mainland shops selling lower-priced jewelry, with average prices of 2,000 yuan ($291), about a third the prices at its flagship stores. , Bloomberg

(Bloomberg) -- Gold in China is trading at a huge premium to international prices as a revival in demand outstrips the country’s imports.

Benchmark prices in Shanghai have climbed to a premium of more than $43 an ounce over their London equivalent, the highest since 2019, according to data from the World Gold Council. Unusually, the two have steadily diverged over the course of the month, with the Chinese market remaining relatively firm despite pressure on international prices.

The difference shows how demand in China is outstripping supply, which is constrained by government policy. Only accredited banks in the country are allowed to import gold, with quantities set by the People’s Bank of China.

Although China’s gold imports in August surged to a four-year high, there’s still a shortfall dating from the start of the pandemic, when purchases from overseas collapsed. Imports weakened again this spring as jewelry demand took a hit after the financial center of Shanghai was locked down to control the virus.

While much of the country continues to be affected by virus curbs and sporadic shutdowns, jewelry demand is improving, particularly ahead of the week-long national holiday at the start of next month, according to consultancy Metals Focus. That in turn could help bolster international prices, which are under the cosh due to rising interest rates around the world.

“As the world’s biggest physical market, China’s local demand can lend some support,” analysts for the firm wrote in a note. “Retailers across China have started building stock for the upcoming National Day Holiday.”

Prices in China have also been buoyed by the sharp slide in the value of the yuan against the dollar. While spot gold has dropped over 8% this quarter, the drop in yuan-terms has been less than 3%.