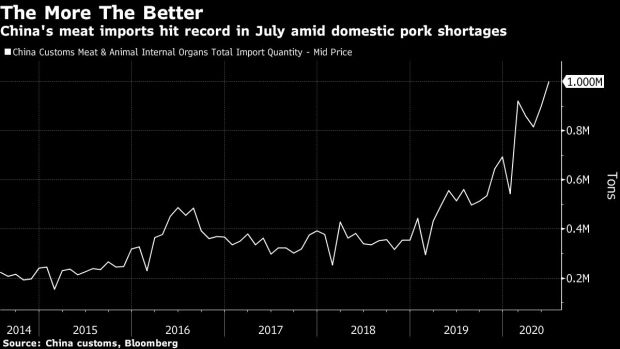 Buyers browse pigs in a holding pen at a wholesale market in Nanning, Guangxi province, China, on Monday, Sept. 16, 2019. A protracted U.S. trade war, protests in Hong Kong, soaring food prices and the slowest economic growth in decades are among the many problems facing Chinese President Xi Jinping as he prepares to celebrate 70 years of Communist Party rule. Photographer: Qilai Shen/Bloomberg , Bloomberg

(Bloomberg) -- Muyuan Foodstuff Co., China’s second-biggest hog breeder, said the company is co-operating with local authorities on an investigation into acquisition of farmland to expand herds.

Muyuan declined to comment on the legal status of the matter when asked by investors on the Shenzhen Stock Exchange’s official Wechat account, but said the investigation would have only a minor impact on its overall expansion. The company aims to expand hog breeding capacity to as many as 50 million hogs by the end of the year, China Business News said in July.

Muyuan and New Hope Liuhe have unveiled aggressive expansion plans to take advantage of record domestic pork prices after outbreaks of African swine fever slashed the country’s hog herds by nearly half. But land constraints coupled with shortages of breeding stock may slow the recovery of herds and continue to drive up meat imports, which hit the highest ever in July.

China imported 1 million tons of meat and offal in July, bringing shipments in the first seven months to 5.75 million tons, a rise of 74% from a year earlier, according to official customs data. Imports surged even as the country halted meat supplies from some overseas producers because of coronavirus worries.