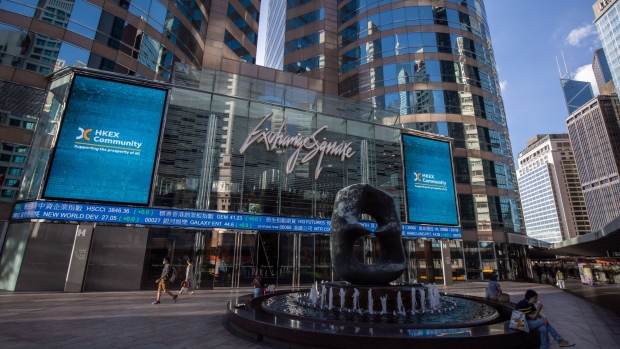 (Bloomberg) -- China’s Sunshine Insurance Group Co. ended flat in its trading debut after Hong Kong’s fourth-largest deal this year, potentially the last big listing in the Asian hub before the end of 2022.

Shares of the Beijing-based firm closed at the listing price of HK$5.83 on Friday, after trading the entire session below water. The company’s IPO raised HK$6.7 billion ($861 million) after the sale of 1.15 billion new shares that were sold at the lower end of a marketed range.

The last big debut of 2022 wraps up a year marked by a slump in proceeds raised through new equity sales as surging inflation fueled an increase in interest rates globally, while high trading volatility dampened valuation prospects. Only seven companies, including Sunshine Insurance, started trading in Hong Kong this year after raising more than $500 million, compared with 17 as of the same period of 2021.

Some stock originally planned for Hong Kong retail investors was reallocated to the institutional tranche, which ended up accounting for 99% of the share sale, according to a message to fund managers earlier this week. The five biggest investors took up 55% of the book, while the top 10 buyers accounted for 81%.

At least seven other companies are set to debut in Hong Kong before the end of the year, making December the second-busiest month of 2022 for debuts in the financial hub. Still, most of the offerings were smaller than $100 million.

Although Sunshina Insurance shares were priced at low end of the offered range, “the valuation can actually match that of China Life and Ping An, or above peers’ average,” said Steven Lam, an analyst at Bloomberg Intelligence.

The insurer posted net income of 1.7 billion yuan ($244 million) for the six months ended in June, a 2.5% drop versus the same period last year. It’s planning to use the proceeds to strengthen its capital base and support growth. Huatai International, China International Capital Corp., UBS Group AG and CCB International Holdings Ltd. are joint sponsors of the deal.