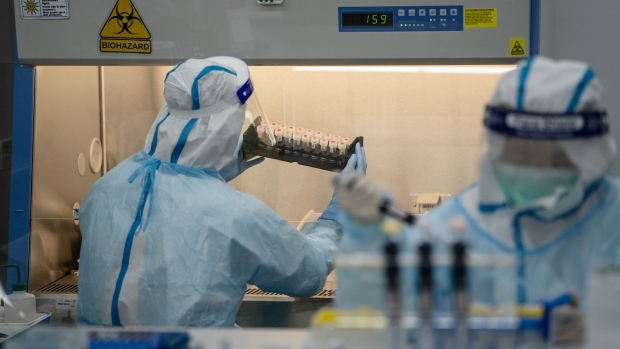 (Bloomberg) -- Adicon Clinical Laboratories Ltd., a Chinese lab operator backed by Carlyle Group Inc., is in talks with investors to raise a new round of funding before its planned initial public offering in Hong Kong, according to people familiar with the matter.

BlackRock Inc., Malaysia’s Khazanah Nasional Bhd. and Mirae Asset (Hong Kong) are among investors that the company is discussing the fundraising with, the people said. Adicon is planning to raise at least $60 million in the new round which would value the business at more than $1 billion, said the people, who asked not to be identified as the information is private.

Adicon has picked Jefferies Financial Group Inc. and Morgan Stanley to lead a Hong Kong IPO, which could raise about $400 million this year, Bloomberg News previously reported. The potential share sale will add to the boom of health-care listings in the Chinese city as companies look to capitalize on rallying stocks and surging investor interest due to the coronavirus pandemic.

Founded in 2004, Adicon operates more than 20 diagnostic laboratories in China and has the capacity to run tests for more than 100,000 people a day, according to its website. Carlyle became the single largest shareholder of Adicon in 2018 when it teamed up with Meinian Onehealth Healthcare Holdings Co. to invest an unspecified amount.

Deliberations for the latest funding round are ongoing, and size may change depending on investor demand, the people said. Representatives for Carlyle, Khazanah and Mirae Asset declined to comment, while representatives for Adicon and BlackRock didn’t immediately respond to requests for comment.