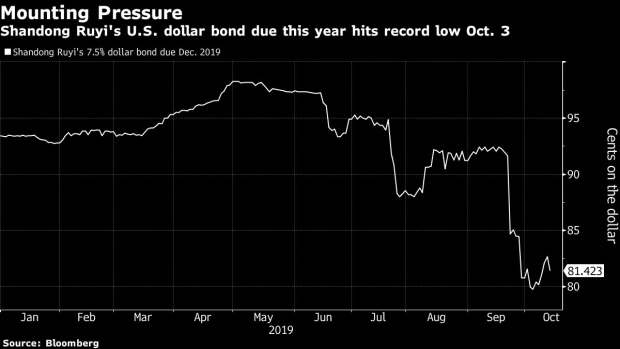 Moody’s lowered the company’s family rating on Thursday by one notch to B3 and its senior unsecured notes issued by subsidiary Prime Bloom Holdings Ltd. to Caa1 from B3, placing both on review for further downgrades. Its bond due in December fell one cent on the dollar to 81.5 cents at 1:18 pm in Hong Kong, the most in more than a week, according to Bloomberg-compiled data.

“The downgrade of the ratings reflect our expectation that Shandong Ruyi’s liquidity will remain weak and debt leverage will stay elevated,” Chenyi Lu, a Moody’s Vice President and Senior Credit Officer, said in a note.

Shandong Ruyi will have to address maturities including domestic bonds totaling 2.2 billion yuan ($310 million) maturing and puttable in October and November, in addition to $345 million of offshore notes due in December, Moody’s said. It also has 2.5 billion yuan of domestic bonds of maturing and puttable in 2020, according to the note. It needs to pay the coupon on a yuan bond on Oct. 23, Bloomberg data show.

Shandong Ruyi’s liquidity risk is higher than expected as “the company has made limited progress on its refinancing plans over the last few months and the timing of the execution of its plans remains highly uncertain,” Moody’s said.

Dubbed China’s LVMH, the apparel firm announced it would slow its aggressive M&A campaign at the end of last year after spending over $4 billion of overseas acquisitions. S&P Global Ratings said last month Ruyi intends to dispose several assets to raise funds but progress has been slower than it expected.

“Any further delay in asset monetization could jeopardize creditors’ confidence in the company’s debt serviceability and add to the already high liquidity pressure,” S&P said a note in September. It downgraded the company’s rating to B- from B.

To contact the reporter on this story: Rebecca Choong Wilkins in Hong Kong at rchoongwilki@bloomberg.net

To contact the editors responsible for this story: Neha D'silva at ndsilva1@bloomberg.net, Chan Tien Hin