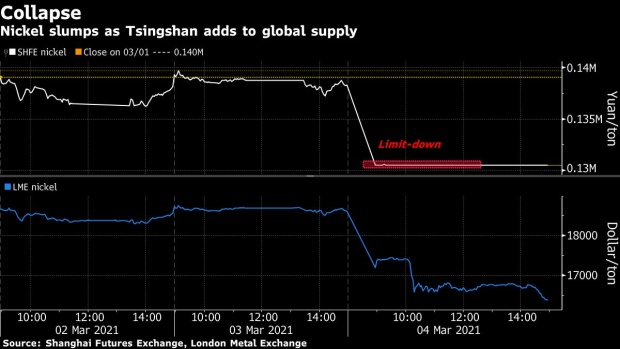 (Bloomberg) -- Fourteen years ago, China’s Tsingshan Holding Group Co. upended the nickel market with a cheaper way to extract the metal used to make steel stainless. They appear to be doing it once again, this time with a focus on batteries.

The company’s new way to make nickel for batteries potentially breaks down one of the biggest bottlenecks to meet surging demand, undercutting a key pillar that’s supported the market. The prospect of additional supply saw the metal cap its biggest two-day loss in a decade, and while prices edged higher Friday, they’re still near a three-month low.

Tsingshan’s move harks back to the early 2000s, when a China-fueled commodities boom saw prices of the metal used in everything from kitchen utensils to aircraft surge above $50,000 a metric ton in 2007.

The rally, and a supply chain largely controlled by the West, prompted Tsingshan to seek a cheaper alternative. It came up with a way to use nickel pig iron from massive deposits in Indonesia, unleashing a low-grade substitute that helped send prices back below $10,000 just two years later.

Now the world’s top stainless-steel maker and a sizable nickel producer is roiling the market again. With prices rallying alongside talk of another supercycle, and a bullish outlook for battery demand amid a global energy transformation, the group said it will start providing nickel matte to battery-material producers and plans to expand nickel investments in Indonesia.

Nickel rose 1.8% to settle at $16,425 a ton at 6:07 p.m. on the London Metal Exchange, after tumbling 14% in the previous two days. The most-active contract in Shanghai capped its worst day since trading began in 2015. Most other LME metals edged higher on Friday.

Tsingshan plans to process nickel pig iron -- until now only used for stainless steel -- into an intermediate product known as matte that can be further refined into battery nickel. That may open up a big new supply route from Indonesia’s low-grade laterite ore mines to electric vehicles and likely reduces the chances of a structural deficit for the material that Elon Musk has said is the biggest concern for Tesla Inc. batteries.

Currently, exchange-traded nickel is only for so-called Class 1 nickel, which must have a minimum purity of 99.8%. That type of nickel only accounts for less than 25% of the the total finished nickel supply, according to ING.

“If the new methods that Tsingshan developed can be widely applied to produce matte and further convert to sulphate, we could see a convergence of Class 1 and Class 2 pricing,” ING’s Yao said Thursday in a note to clients.

Still, there’s the possibility of setbacks considering the process is new for the company, according to Celia Wang, an analyst at Mysteel.

It may also take time for matte production to ramp up substantially. Sydney-listed Nickel Mines Ltd., which counts a Tsingshan group company as a substantial shareholder, said Friday that its projects in Indonesia’s Morowali Industrial Park haven’t yet undergone the minor modification needed to make matte and they will continue to sell NPI into Tsingshan’s stainless operations.

Nickel prices were trading at a six-year high as recently as last month on expectations that surging demand from EVs would spur a shortage. Musk said in February that nickel was Tesla’s top concern for scaling lithium-ion cell production and was behind a shift to using iron for some EV batteries instead.

Nickel is critical to the world’s clean-energy transition. It packs more energy into batteries and allows producers to reduce use of cobalt, which is more expensive and has a supply chain that’s considered less transparent. Previous comments from Musk have drawn attention to the possibility of a crunch. He pleaded with miners last year to produce more, promising a “giant contract” for supply produced efficiently and in an “environmentally sensitive way” amid concerns that a deficit looms as early as 2023.