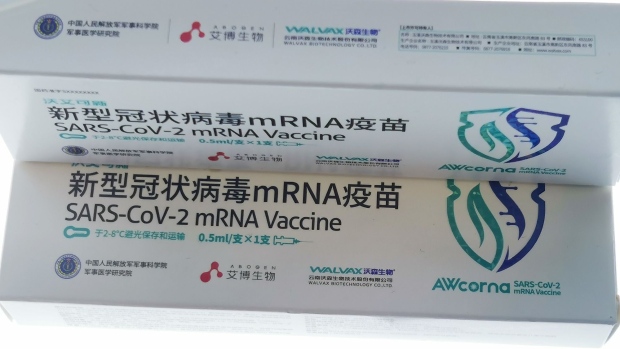 (Bloomberg) -- A Chinese-developed mRNA Covid vaccine got its first ever emergency use authorization from Indonesian authorities, a tentative step in China’s efforts to gain ground on Western inoculations widely used around the world.

The shot, named AWcorna, was co-developed by Walvax Biotechnology Co, Suzhou Abogen Biosciences Co. and the Chinese military and has been cleared for use in people aged 18 and older, Walvax said in a statement. The halal-certified vaccine can be used as either a primary or booster dose, it said.

Walvax said the authorization is based on ongoing phase-three clinical trials, though the company didn’t give efficacy numbers in its statement. China itself has not authorized the shot for use domestically yet.

The vaccine will be produced in Indonesia. Based on evaluations, two shots of the vaccine have an efficacy rate of 71.17% against infection by the omicron variant, Penny Lukito, the head of Indonesia’s food and drugs agency, said at a briefing in Jakarta on Friday.

Taken at face value, that’s roughly in line with the effectiveness of Western-developed mRNA shots against omicron infection, but the Chinese vaccine’s performance has not been disclosed publicly or published in a peer-reviewed scientific journal yet. It’s also unknown how it performs at preventing serious illness and death.

AWcorna’s approval comes nearly three years into the pandemic and underscores the gap between Chinese vaccine developers and their Western rivals. Moderna Inc. and Pfizer Inc. are already pushing through approvals of their next-generation of mRNA shots that target both the original strain and omicron subvariants. Their shots are mainstays of booster programs being kicked off in countries across Europe, as well as the US, to ward off a winter resurgence.

China is yet to approve any mRNA shots for use domestically and relies instead on less-effective inactivated vaccines to inoculate its vast population. The BioNTech shot remains in a regulatory limbo despite applications filed by its Chinese partner Shanghai Fosun Pharmaceutical Group Co.

Walvax is seeking emergency authorization for the shot in China. Unlike the mRNA vaccines developed by the Pfizer-BioNTech partnership and Moderna that require deep freeze, its shot can be stored at a normal refrigerated temperature of 2-8C.

Separately, Indonesia approved the use of its first home-grown vaccine, called Indovac. The country’s Covid cases have stabilized, with the daily tally hovering around 1,000 to 2,000. To date, more than 171 million people have received two doses of a coronavirus vaccine.

Even though there’s no longer a critical situation in Indonesia, the pandemic hasn’t ended so the emergency use policy still applies, the health ministry’s spokesman Syahril Mansyur said.