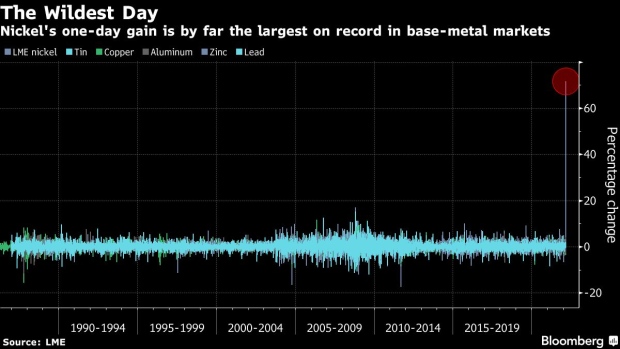 (Bloomberg) -- The Chinese nickel company at the center of a historic short squeeze has secured a package of loans from local and international banks to help it meet a wave of margin calls, according to people familiar with the matter.

Tsingshan Holding Group Co., which faces billions of dollars in potential losses on short positions in nickel futures, won credit promises from banks including JPMorgan Chase & Co. and China Construction Bank Corp. in meetings that ran into the pre-dawn hours of Wednesday morning, the people said, asking not to be named since the matter is private. Some of the terms, such as how much extra collateral Tsingshan needs to pledge, are still under discussion, the people said.

Chinese authorities directed Tsingshan’s domestic banks to offer more credit lines to the company, two of the people said. A majority of these new loans will be used for margin calls on its existing positions on the London Metal Exchange, the people said.

The bank loans are expected to help Tsingshan address its immediate liquidity squeeze. With large nickel production facilities in Indonesia and China, coupled with surging prices and strong demand, the firm’s owner, Xiang Guangda, told bankers at the meetings that he’s confident his company can meet its obligations, according to the people. He’s also reviewing his hedging strategy and is considering exiting the bets against nickel, one of the people said.

The deals come after the price of nickel, the metal used to produce stainless steel and electric batteries, rocketed to above $100,000 a ton on Tuesday before the LME suspended the market and canceled all trades that took place during Asian hours. Nickel has been rising for weeks on fears of disruptions to supplies from Russia, the largest exporter of refined nickel. The rally intensified this week, with prices surging as much as 250% in little more than 24 hours, as traders with short positions rushed to cover their bets.

Xiang and his firm hold a position of about 100,000 tons of nickel on the LME, people familiar with the matter said. It could be larger when bets through intermediaries are taken into account. His mark-to-market losses would be in the billions of dollars even at $48,063 a ton, which is where the price now stands after it was halted and trades were canceled.

On Monday, CCBI Global Markets, one of Tsingshan’s brokers, failed to pay hundreds of millions of dollars in margin calls on its nickel positions. The LME refrained from putting it into default, giving it more time to pay. The broker was able to settle the margin calls on Tuesday after several clients, including Tsingshan, got loans to cover their positions, one of the people said.

Traders must deposit cash, known as margin, with their brokers on a regular basis to cover potential losses. Brokers in turn must hold margin at the clearinghouse, LME Clear. If the market moves against those positions, they receive a margin call for further funds -- and if they fail to pay, they can be forced to close their position.