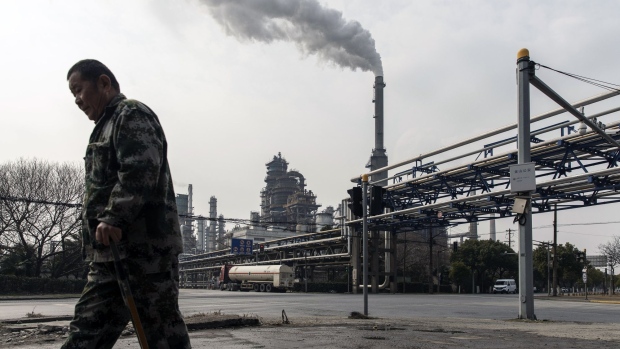 Smoke rises from a petrochemical production complex on the outskirts of Shanghai, China, on Tuesday, March 1, 2022. Oil extended its relentless rally before an OPEC+ meeting as the International Energy Agency warned that global energy security is under threat following Russia’s invasion of Ukraine. Photographer: Qilai Shen/Bloomberg , Bloomberg

(Bloomberg) -- Oil demand in China, the world’s largest importer, may pick up in the months ahead after Beijing released trade allowances enabling its vast refining industry to ship in more crude and export more fuel.

Local refiners and traders have been handed two separate batches of crude-import quotas for the remainder of this year and early 2023, as well as a 15 million ton fuel-export quota, according to industry consultant JLC. The moves are likely to increase China’s oil demand as processors grab cargoes to use up their allowances, according to traders participating in the market.

The anticipated increase in China’s oil consumption as refiners lift operating rates may help to support global prices that recently collapsed to the lowest level since January as traders shunned commodities. Chinese crude demand has been hobbled this year as growth slows amid rolling Covid-19 lockdowns.

The slump in prices has prompted the OPEC+ producers’ coalition to weigh a substantial cut in production, with ministers set to meet in Vienna later Wednesday. A major reduction in supplies could tighten the market just as traders start to turn more bullish on a return of China’s appetite for oil.

To use up their quotas, buyers may take more short-haul cargoes that can arrive by the end of December, or purchase crude from Russia or Iran, flows avoided by many western users and some Asian peers, traders said. The spot market in Asia will start actively trading December-loading Middle Eastern cargoes later this month that take three to four weeks to reach China.

In terms of fuel exports, the allocated volume equates to more than 100 million barrels, meaning that if refiners are to take advantage of the quotas they need to ramp up operating rates. Runs are expected to surge by almost 1 million barrels a day in October and November, industry consultant FGE said.

To do that “refiners will need to seek short-haul cargoes, while drawing on commercial inventories,” FGE said in an Oct. 4 note. “We have not heard of any SPR release from the Chinese government so far, but we continue to see this as a possibility,” it said, referring to stockpiles controlled by the state.

Ahead of the OPEC+ meeting, global oil benchmark Brent traded at $91.77 a barrel on Wednesday. While that’s 18% higher year-to-date, it’s down from above $100 a barrel three months ago.