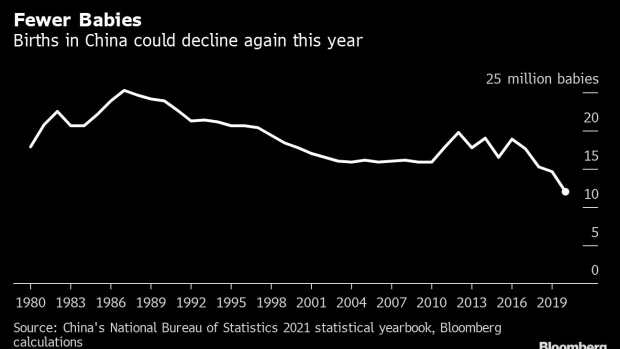 BEIJING, CHINA - SEPTEMBER 01: Students wear protective masks as they ride on their mother's scooter for class on the first day of the new school year at an elementary school on September 1, 2021 in Beijing, China. While cases still remain relatively low compared to many countries, China has largely contained its most recent COVID-19 outbreak of the the highly contagious Delta variant. In Beijing, as a precaution millions of students and parents were required to stay in the city for two weeks before the beginning of the school year, teachers are required to be vaccinated, daily temperatures checks are taken, and masks are mandatory for most school functions. (Photo by Kevin Frayer/Getty Images) , Photographer: Kevin Frayer/Getty Images AsiaPac

(Bloomberg) -- Three Chinese regions extended maternity leave by at least 30 days, the latest government effort to lift birth rates which have been falling in recent years.

Women in Beijing and Shanghai will now be able to take at least 158 days maternity leave, according to announcements Friday from the cities’ governments, an increase of 30 days. The leave is at full pay, and can be extended if the birth is difficult or there are complications.

The eastern province of Zhejiang also extended maternity leave by another 30 days for women having their second or third child, bringing their total paid leave days to 188, the official Xinhua News Agency reported Thursday.

Paternity leave remains unchanged in Beijing and Zhejiang at 15 days and 10 days in Shanghai. Beijing also allows fathers to take more leave days if their spouses reduce their leave by the same amount and both employers agree. Beijing and Shanghai also granted couples five days of leave for each parent every year before their child turns three years old, while Zhejiang permits 10 days.

Earlier this year, China allowed all couples to have a third child as the country seeks to address a demographic crisis that has led to a shrinking labor force and a rapidly aging population. The country’s birth rate fell to 8.5 births per 1,000 people in 2020, the lowest in data back to 1978. Some demographers estimate the population could start falling as soon as this year.

Several other regions including Hebei and Anhui have also extended maternity leave or released draft policies on the matter.

However, the drastic difference between the length of maternity and paternity leave, which is only partially funded by the state, has caused growing discrimination against female workers by employers.