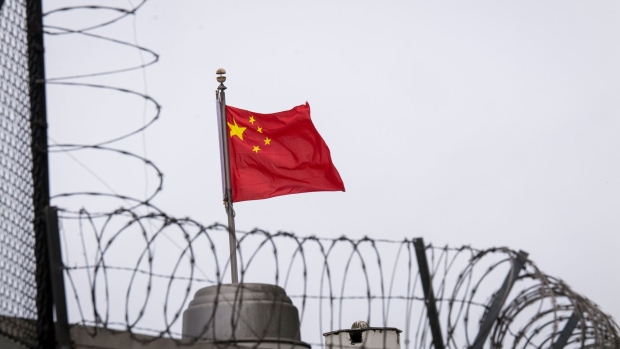 A Chinese flag flies outside the China Consulate General building in San Francisco, California, U.S., on Thursday, July 23, 2020. A Chinese researcher at the University of California at Davis who was charged with lying about her military service has taken shelter at the Chinese consulate in San Francisco, according to court filings. , Bloomberg

(Bloomberg) -- A Chinese researcher was ordered to remain in a California jail while she fights charges she lied about her military service in China to get a U.S. visa.A federal judge in Sacramento, California, rejected a request for bail from Juan Tang, whose prosecution for visa fraud has helped fuel tension between China and the U.S. Prosecutors argued that if she was freed from custody, the Chinese government might help her escape the country.Tang, 37, is being held in county jail in Sacramento, near where she did cancer research at University of California at Davis. She is among Chinese scholar visa holders in more than 25 American cities who the Justice Department suspects of having an “undeclared affiliation” with the Chinese military.The case is U.S. v. Juan Tang, 20-mj-96, U.S. District Court, Eastern District of California (Sacramento).