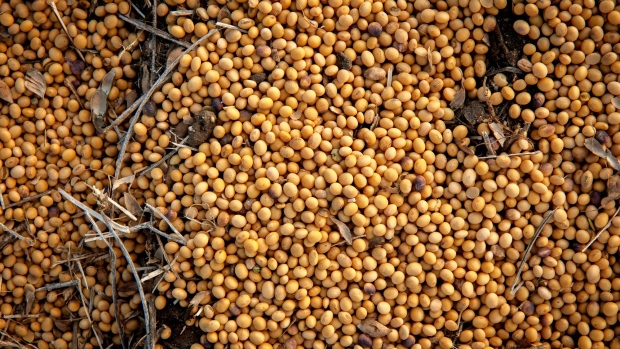 Soybeans during a harvest at a farm in Pace, Mississippi, U.S., on Thursday, Oct. 7, 2021. The U.S. Department of Agriculture (USDA) is scheduled to release 2021-22 soybean stockpiles estimates on October 12. Photographer: Rory Doyle/Bloomberg , Bloomberg

(Bloomberg) -- Chinese researchers said they have developed the technology to turn industrial emissions into animal feed at scale, a move that could cut the country’s dependence on imported raw materials such as soybeans.

China is the top importer of soybeans, which are crushed to produce meal, mainly to feed its pig herd that’s the largest globally. It buys huge volumes from countries including Brazil, Argentina and the U.S. The commodity has also been a major source of friction contributing to U.S.-China trade tensions.

China faces shortages of farm commodities because of a lack of productive farmland and increasing demand from a more affluent population, and tries to boost yields and reduce wastage. The Science and Technology Daily said that 80% of China’s raw material needs for feed proteins are served by imports.

If China can produce 10 million tons of synthetic protein using the new technology, that would be equivalent to about 28 million tons of soybean imports, the researchers noted. Producing synthetic proteins for animal feed at a large scale would also help China in its decarbonization program, they added, a major policy goal for the Communist Party.