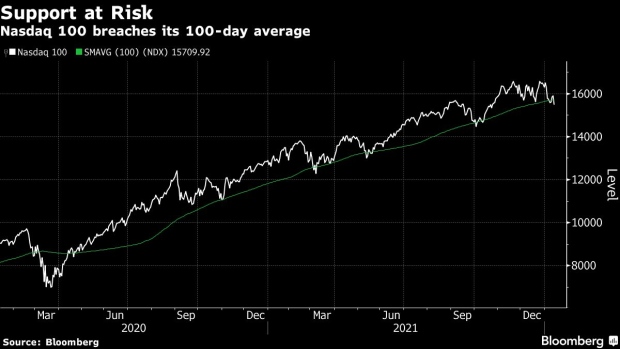 (Bloomberg) -- Traders looking for the bottom for beaten-down Chinese technology stocks are finding the task complicated by the sector’s wild swings.

Hong Kong’s Hang Seng Tech Index, which tracks the country’s technology behemoths, has seen its 10-day volatility surge to a four-month high as shares swung between sharp gains and losses. It’s more turbulent than most of the world’s major benchmarks and twice as volatile as the Nasdaq 100 Stock Index and mainland’s ChiNext Index, according to data compiled by Bloomberg. The Nasdaq Golden Dragon China Index of U.S.-listed companies is trading at a similar volatility level.

After dropping to the record low Jan. 5, the Hong Kong technology gauge then delivered its best five-day performance since China’s stock rout began in February, rising 11% in a week. Some of last year’s biggest decliners led the rally, including Alibaba Group Holdings Ltd. and online health platform JD Health International Inc. Each had risen 20% from its recent low. But the gains didn’t last, with the gauge falling 2.2% over the past two days.

The swings reflect investors’ divided views about the pace and strength of the sector’s recovery. On the one hand, cheaper valuations and discounts to global peers have made Chinese tech stocks appealing to some investors, including BlackRock Inc. and Goldman Sachs Inc. On the other hand, government restrictions and a slowing Chinese economy remain the double whammy on the sector’s profitability. And the prospect of rising interest rates is putting pressure on global liquidity.

“It’s still hard to determine whether valuation is fair,” said Paul Pong, managing director at Pegasus Fund Managers Ltd. in Hong Kong, who sold some of his tech holdings in the rebound. “Risks are still hanging here -- rising rates have never been friendly for the sector, and the implementation details of Beijing’s tightened regulations will continue to hurt sentiment. Any trading strategy should be tactical, short-term.”

Compounding the problem: Trading has been relatively thin. The Hang Seng Tech rallied amid an average turnover that is 25% less than its one-year average, a reflection of caution when the sector rises. The most active exchange-traded fund tracking the gauge is set to see its biggest weekly outflow since April.

Among the reasons for fresh concern: State-owned China Cinda Asset Management Co. unexpectedly backed out of a plan to take a major stake in Ant Group Co.’s consumer finance unit, and investors are fretting that that Tencent Holdings Ltd. may sell more stakes in more companies, such as Meituan and Pinduoduo Inc. after shedding stake in JD.Com Inc. and Sea Ltd.

“The short-lived rally shows that it’s very hard to tell where the bottom is for the tech shares in the longer term,” said Castor Pang, head of research at Core Pacific Yamaichi. “Obviously investors do not want to take risk when interest rates are expected to rise and the earnings outlook is uncertain.”

Selling in U.S. technology shares accelerated after the Nasdaq 100 undercut its 100-day moving average. The threshold, currently around 15,710, has repeatedly provided support since the bull market began in March 2020. Futures on the index were little changed at 6:25 a.m. in New York on Friday.