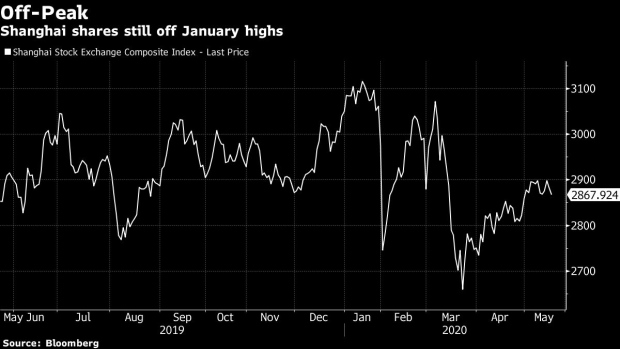 (Bloomberg) -- Political momentum intensified this week to curtail investments in Chinese companies, in the latest sign that tensions between the world’s two largest economies have reignited.

While a push for tougher scrutiny of financial ties between the U.S. and China has long simmered in Washington, the Senate quickly -- and in bipartisan fashion -- moved Wednesday to advance legislation that could result in delisting some securities from American stock exchanges.

The added urgency stems in part from mounting calls for lawmakers and President Donald Trump to punish China for its alleged failure to disclose information early on about the spread of the COVID-19 virus. The pandemic has cost more than 90,000 American lives and resulted in tens of millions in job losses.

The economic hit has curbed Trump’s ability to pressure China through tariffs, which can increase costs for American businesses and consumers. That has turned attention to other points of contention, like investment transparency. Earlier this month, the Trump administration and lawmakers stopped the Federal Retirement Thrift Investment Board, which oversees a retirement savings plan for government workers, from moving to a benchmark index for its international fund that includes Chinese stocks.

U.S. stocks dropped Thursday as relations between the U.S. and China -- which had improved with an initial trade deal earlier this year -- appeared to deteriorate after news of the legislation and as strains flared again over Hong Kong.

Proponents of stricter rules on Chinese stocks argue that it’s in the interest of national security and investors.

“The level of fraud, the lack of transparency, the failure for investor protections, that has to be changed,” White House economic adviser Larry Kudlow said Thursday during an event hosted by the Washington Post.

The Senate legislation would require companies including Alibaba Group Holding Ltd. and Baidu Inc. to certify they’re not controlled by a foreign government. The firms would have to do so because Chinese firms block Washington-based regulators from inspecting financial audits.

The bill says that if the U.S. Public Company Accounting Oversight Board can’t review the companies’ audits for three straight years, their securities would be banned from trading on the New York Stock Exchange, Nasdaq or elsewhere in America.

A companion bill has been introduced in the House and Speaker Nancy Pelosi said Thursday that the appropriate committees will review it, but she stopped short of promising a vote.

Wall Street immediately took note of the heightened attention from Congress. Analysts at Goldman Sachs Group Inc. sent a report to clients Thursday that suggested a forced de-listing could lead to abrupt price actions. Chinese companies traded in the U.S. have a market cap in excess of a trillion dollars and about $8 billion of those stocks change hands every day on average, according to the analysis.

Their research examined the Congressional proposal and its potential impact, saying that the focus of U.S. regulators and legislators on this issue has recently been elevated after some recent cases of alleged accounting irregularities.

For some, the need for action was exemplified by China-based Luckin Coffee Inc., a coffee chain embroiled in an accounting scandal. The company recently announced the Nasdaq stock exchange’s intention to de-list the company in a statement.

“Had this legislation already been signed into law, U.S. investors in Luckin Coffee likely would have avoided billions of dollars in losses,” Democratic Representative Brad Sherman of California, who introduced the House bill, said in a statement.

Still, the reality is nothing will change overnight, or likely anytime soon.

Even if the Senate bill were to become law, any eventual de-listing of Chinese firms would be years away -- potentially long after Trump and many current lawmakers have already left office.

Roger Robinson, president and CEO of RWR Advisory, a research and risk management consultancy, said the bill is a “remarkable bipartisan repudiation of the preferential treatment accorded to Chinese companies in our capital markets.”

The bill would also require the SEC to write a regulation, invoking the agency’s lengthy rule-making process. Finalizing an SEC rule requires at least two rounds of votes by a bipartisan commission, as well as a series procedural steps like public notice and comment. Trump’s sway over the process is also limited because of the SEC’s status as an independent agency.

So far, SEC Chairman Jay Clayton has issued a series of public statements warning American investors about the accounting issues related to Chinese firms whose auditors refuse to open their books. The agency has also announced a roundtable discussion on July 9 that will involve commentary from investors, industry and regulators on risks associated with investing in China and other emerging markets.

Derek Scissors, China scholar at the conservative American Enterprise Institute, said he doesn’t believe any Chinese firm will either disclose properly or be de-listed as a result of the bill.

“We’ll start another round of negotiations in 2021, no matter who’s president, and announce another agreement in which they falsely promise to disclose and we agree to keep them listed,” he said.

Exchanges including the New York Stock Exchange and Nasdaq have previously pushed back against the idea of delisting. But they’ve come under increasing government pressure amid the growing fervor for action against Chinese companies. Spokesmen for the NYSE and Nasdaq declined to comment.

“We do have some very specific issues with the way that disclosures are provided from certain emerging markets, including China,” Nasdaq Inc. Chief Executive Officer Adena Friedman said this month in a Bloomberg Television interview.

While the issue has only recently become a political focus for China hawks in the White House, for regulators the problem dates back almost two decades. The inspections by the little-known PCAOB, which Congress established in 2002 in response to the massive Enron Corp. accounting scandal, are meant to prevent fraud and wrongdoing that could wipe out shareholders.